That Moment Of Exhilaration…And Afterwards 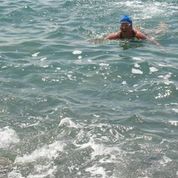 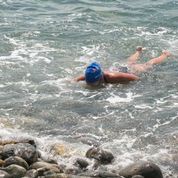 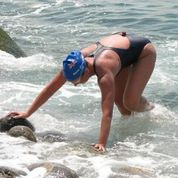 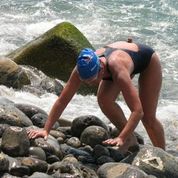 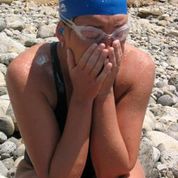 Every swimmer remembers the feeling of finishing an open water swim, especially a marathon swim, competitive race, or channel crossing. The feeling is great.

But what happens afterwards?

We asked Kimberly Chambers who just completed her fourth channel of the Oceans Seven across the Catalina Channel yesterday as she sat at her work office less than 18 hours after emerging from an 11 hour 26 minute very rough water swim in the Pacific:

“It feels to me as though I have just emerged from major surgery and am coming back to consciousness from the general anesthesia. Body hurts and my mind isn’t exactly with it. Arriving at work today, I’ve been greeted with lots of congratulatory words, but also disbelief that I am here in the office.

I feel again profoundly changed – it wasn’t easy. I never would expect it to be, but the conditions were pretty challenging. 20 knot winds and 7 foot swells. John Pittman and his crew said we may have to cancel and that the conditions were highly unusual. He gave me the option of swimming on another date with most likely calmer conditions.” There was a Small Craft Advisory in place, but Chambers and Pittman agreed to go halfway out into the channel and then make a decision. After a very rough ride out to the Pacific, the 50 foot Outrider constantly listed side to side with spray soaking the deck. “I felt very sick the whole ride over.”

Pittman stopped the boat halfway into the channel. “I was sure he was going to say that we need to turn around and try for another day.” He explained the 15-knot conditions to Chambers. “As long as he felt the crew would be safe, I told him that I would like to do it.”

Melissa King kayaked for Chambers from the start on Catalina Island at midnight and through the early-morning darkness. “I had a dolphin escort 90 minutes into the swim – I heard them squeaking underwater through the waves. They came back a few hours later and then close to my finish hundreds of them swam up both sides of the boat. It was MAGICAL. The bioluminescence also lit up my hands.”

As King kayaked alongside Chambers the entire 20.2-mile distance, little jellyfish stung the New Zealander throughout the swim. “It was nothing of concern, more of a stinging annoyance.”

As she carefully clawed her way over the rocks at the finish on the California mainland, Forrest Nelson stood a short distance away and encouraging her. “He said, ‘Keep going, keep going’ until I was on dry rocks and was officially finished. I burst into tears. Joe Locke and one of my other friends were also there to greet me. I’ve learned that these events are not merely swims, they are personal emotional journeys and one thing is for sure, you emerge from the water a different person that the one who jumped in at the beginning.”

Chambers became the second person from New Zealand to complete a crossing of the Catalina Channel. 36 years ago, Sandy Blewett was the first.