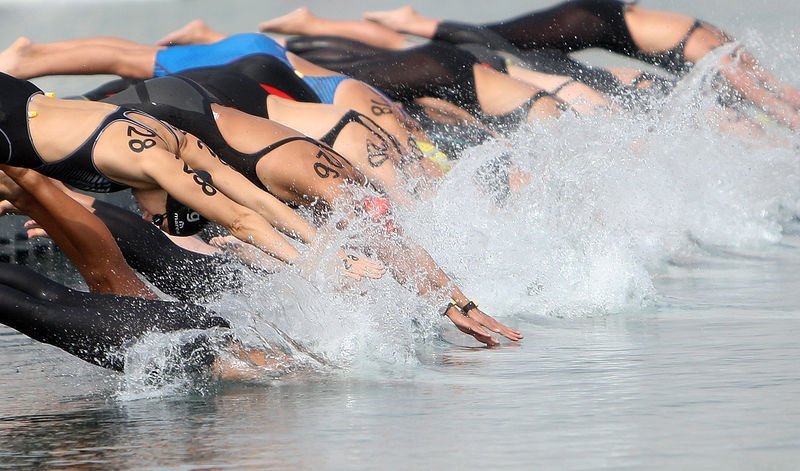 Imagine 17 years from now. 5 Olympic quadrennials in the future.

How will the Olympic 10K Marathon Swim be conducted? We can only imagine the possibilities…

* each athlete will be outfitted with a transponder that transmits in real time the athlete’s heart rate and other biometrics from the number of breaths per minute to the strokes per minute
* each athlete will be colorfully outfitted in swimwear that proudly shows off their nation’s colors: Australians in green and yellow, Americans and French in red, white and blue, and Japanese in red and white
* each athlete will confidentially provide their pre-race strategy that will be transmitted in real time during the race to the spectators and fans
* the world’s media and spectators will watch replays and slow-motion images of the race on their wearable mobile devices and at their homes
* athletes must take their hydration in their swimwear, using special pouches and micro-containers filled with scientifically formulated feeds * officiating will be conducted objectively and immediately via cameras both above and below the water’s surface
* each athlete will wear a swim cap that can transform their thoughts to written form that is transmitted to the viewing public and media
* underwater drones will cover the race as comprehensively as airborne drones do with added perspectives from cameras positioned on the officials’ boats and on dryland; viewers will be able to watch the race in quadruple split screens with (1) underwater views, (2) aerial views, (3) escort boat perspectives, and (4) dryland perspectives
* turn buoys will have digital displays that post the split times and speed in kilometers per hour of each athlete
* GPS data will be able to compare the exact distance swum by each athlete down to the cm
* broadcast images will be able to show and compare the speeds of the athletes in real time relative to athletes of the 2008, 2012, 2016, 2020, 2024, and 2028 Olympic Games