The Battle Of Turtle Gut Inlet Won By Kyle McElvee 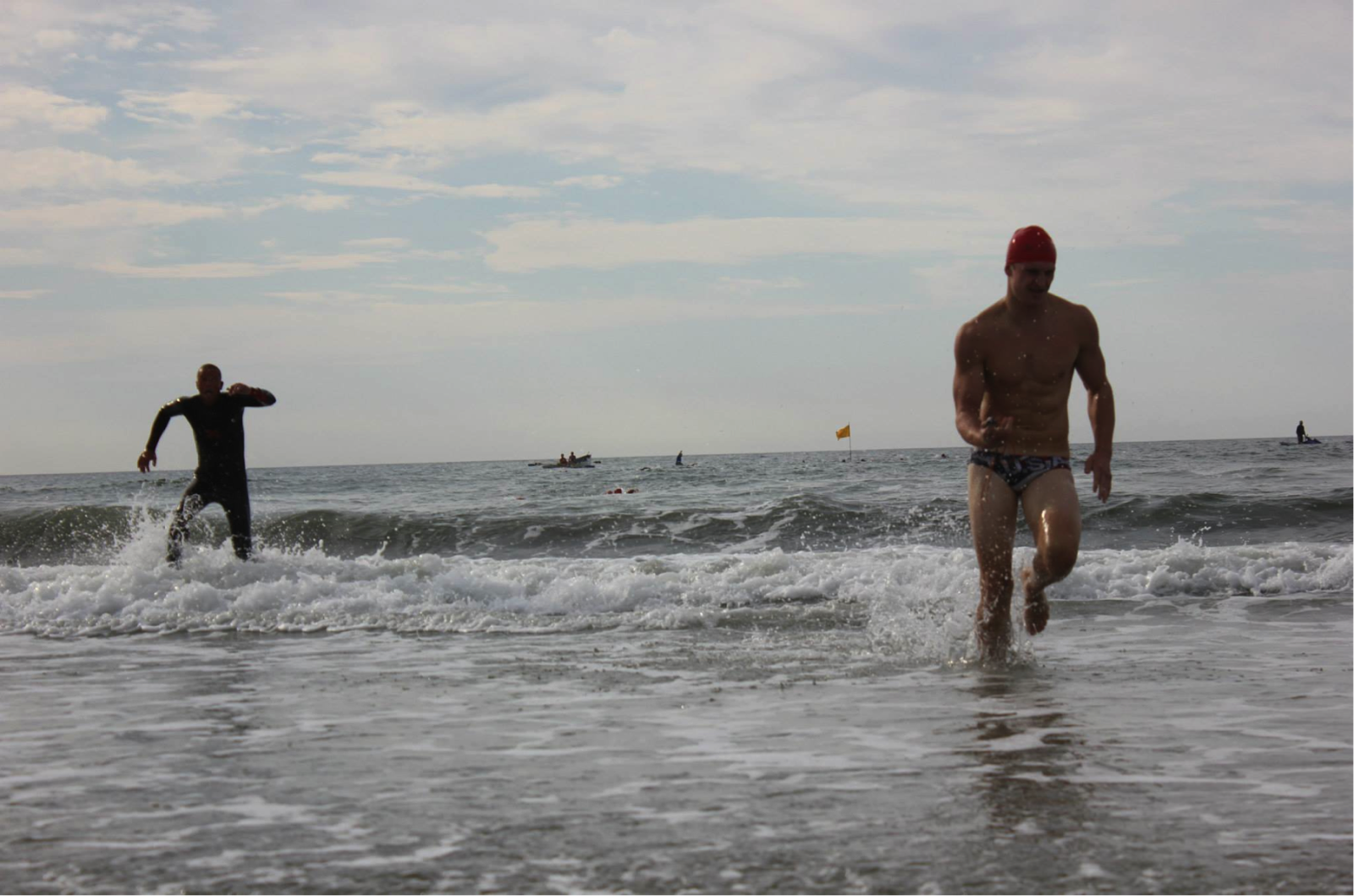 Barbara Cresse, a founder and current director of the South Jersey Triathlon Club, founded a race off the shores of southern New Jersey called the Battle of Turtle Gut Inlet.

Her intention? To honor an historical event that occurred in what is now Wildwood Crest, New Jersey with 2 open water swims of a half-mile and mile in the Atlantic Ocean.

On June 29th 1776 – a few days before the signing of the Declaration of Independence in America – a colonial sailing vessel, the Nancy, bringing gunpowder from the Virgin Islands to revolutionary forces in Philadelphia, was attacked by British navy ships. The Nancy ran aground and the colonists blew up a portion of their own cargo, killing several British sailors, as well as Lt. Richard Wickes, the first New Jersey colonist to die for his soon-to-be declared country. But most of the gunpowder made its way to shore and ultimately to Philadelphia, where it was used in the Revolutionary War. 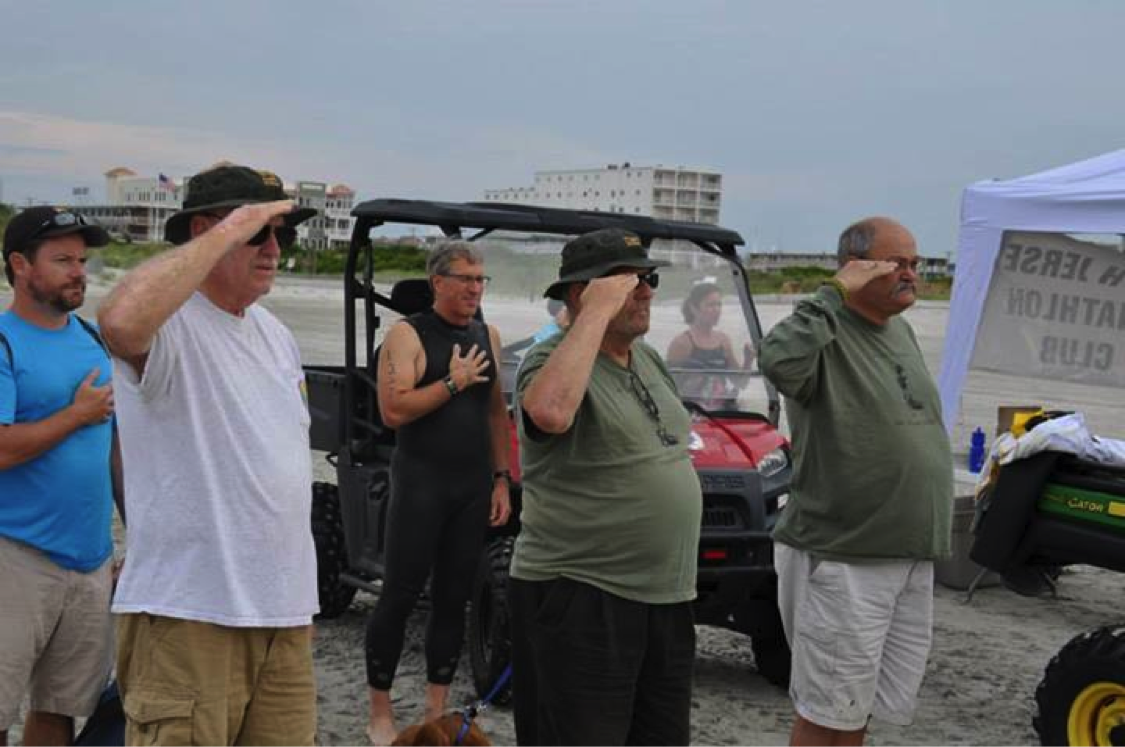 Because the race honored some of the first veterans of this country, it received generous sponsorship from the Vietnam Veterans organization in Wildwood Crest. They were represented by their President Bill Davenport, First Vice President Harry Weimar, and Treasurer Vince DePrinzo, Without their help and funding, the event would not have taken place.

Today, Wildwood Crest in Cape May County at the southern tip of New Jersey is a popular family resort with huge beaches.

The Wildwood Crest Beach Patrol provided life and safety support for the race and helped to keep swimmers on course. Chief Bud Johnson set out the box course and had his lifeguards posted in the ocean along the route with wave runners, row boats and rescue boards. Chief Johnson said, “It was quite an event. With over 100 swimmers, we had everyone who entered the water come out safely. Every participant finished the race and was accounted for. There were no rescues.”

The mile race was won by local lifeguard, Kyle McElve, in a time of 13:34. He was closely followed by Bill Auty, a former North Wildwood lifeguard, in 13:42. The first female finisher was Amber Glenn, a New Jersey scholastic champion swimmer from Ocean City High School, with a time of 14:10.

The swimmers were flying, helped by the current. The half-mile race, which included many first-time ocean competitors, was won by Lauren Fischer. The first male finisher was Walt Kostyk.

The race attracted many of South Jersey’s veteran ocean swimmers. George Thieler won the over-70 age group, finishing 24th overall with a time of 18:20. Mike Martin, who had a 4th place finish at the United States Masters Long Course National Championships, also medaled in the 50-54 age group. Dave Hirsch won the 55-59 age group with a time of 17:29, which was good for 18th place overall. He was followed by Cape May County Freeholder Will Morey in a time of 19:06. When asked what he thought of the event, Hirsch gave a lot a credit to the organizers. “I have been involved in planning these things before, and there is no doubt that Barb Cresse put a lot of time and effort to make this event worthwhile. And let’s not forget the excellent support from Chief Bud Johnson and his Wildwood Crest Beach Patrol volunteers out on the race course.”

The South Jersey Triathlon Club consists of multi-sport athletes from the southern counties of New Jersey; but its members also reside from Pennsylvania to Northern New Jersey. The club holds group workouts, seminars and races. The club was formed by a merger of the Wildwood Triathlon Club and the Exit 10 Multi-Sport Club. Located near some of the finest beaches on the east coast, they are best known for their expertise in ocean swimming.

According to Steve DelMonte, the founder of DelmoSports, which hosts several premier triathlons in Southern New Jersey, “The South Jersey Triathlon Club is the place to go to learn how to become a proficient ocean swimmer. They have folks who are in the ocean almost every day from April – sometimes until December. They have a group of volunteers that will take you out on your first ocean swim, educate you on tides and rip currents, and help you overcome the anxiety of being in rough surf and swimming with the critters that make their home there. Once you’ve swam with a dolphin, you’ll be hooked on ocean swimming.”

Cresse summed up the future of the event. “I guess we’ll have to do it again next year.”