The Calm Before The Olympic Marathon Storm

Tomorrow at 12 noon GMT in London, the women’s Olympic 10k Marathon Swim will start. And if the Olympic triathlon was any indicator, there will be over 100,000 fans pouring into Hyde Park to watch gold medal favorite Keri-Anne Payne try to climb upon the Olympic podium.

The athletes and their coaches (in kayaks) took to the course today to check out the sight lines and tangents between the large Olympic buoys.

Tomorrow’s weather is forecasted to be generally pleasant and comfortable which means the crowds will be coming out in full force.

Like rarely before in the history of the sport. 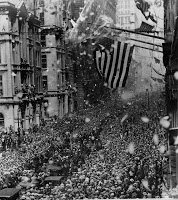 Not only will the VIP and paid spectator stands be full near the finish, but there may also be areas around the Serpentine where fans may be standing 30-40 people deep.

Perhaps only Gertrude Ederle‘s ticker-tape parade in New York City in 1926 after her English Channel swim rivals the adulation that the 25 marathon swimming women will receive tomorrow.

But if the global television audience is included, these 25 women will be the most watched marathon swimmers in history.

Open Water Source will provide real-time information on the 50 athletes, their tactics, and strategies as well as background information on the athlete’s training, the rules and history of the sport, and fun facts of the Serpentine.

In addition, a comprehensive guide on the Olympic marathon swim is provided in French, German, Italian, Japanese (日本語), Portuguese, and Spanish. Follow the action online or on television…and enhance your experience with Open Water Source.