The Clash Of The Titans In The Olympic Marathon Swim

While the women’s Olympic marathon swimming 10km has a clear-cut gold medal favorite in Keri-Anne Payne, Great Britain’s sweetheart in the open water, the men’s field is a toss-up.

On one side of the elite equation is Thomas Lurz who has reigned at the highest echelon of the sport over the past decade. 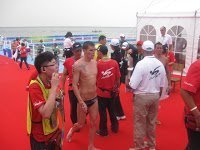 On this side of the competitive ledger, Greece’s Spyridon Gianniotis, another veteran in open water swims around the world, lurks ready to win the gold…as does 4-time Olympian Petar Stoychev.

On the other side, Tunisia’s Oussama Mellouli has joined the marathon swimming club and has an excellent shot of capturing gold. The venue is perfect for a Mellouli victory: the course is flat without waves, currents or marine life and the water is comfortably cool and definitely not cold.

Alongside these titans of the sport are the young guns ready to take over if the veterans fall apart. Canada’s Richard Weinberger and Germany’s Andreas Waschburger will both be in the pack, ready to pounce on any opportunity for gold.

Get the inside scoop during the race here.