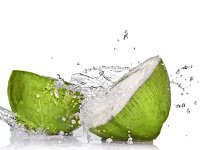 “Coconut water is the fastest growing beverage category in the world,” says Julian Mellentin, director of New Nutrition Business. “It is growing even faster than energy drinks.”

While bottled coconut water was once only found in boutique health food shops in the United States, it is increasingly seen on chain supermarket shelves throughout the country.

Coconut water seems like such a great hydration product for open water swimmers.

The very image of a coconut tree swaying on an idyllic shore with roots in the soft white sand and tropical waters lapping nearby seems like the perfect fit for open water swimmers. More than powdered drinks, synthetically produced hydration formulas, drinks with food coloring and preservatives, coconut water is truly a natural and (largely) organic product.

Maxim may be the hydration of choice for channel swimmers and other brands (from Cytomax to Gatorade) may be the preferred drink of triathletes and open water swimmers, but what benefits can coconut water bring to athletes?

The clear liquid is composed of chemicals including sugars, vitamins, minerals, electrolytes, enzymes, amino acids, cytokine, and phyto-hormones. The sugar, electrolytes, and minerals help to replenish hydration. Coconut water is also composed of many natural bioactive enzymes such as acid phosphatase, catalase, dehydrogenase, diastase, peroxidase, RNA-polymerases that help in the digestion and metabolism. Coconut water also contains a very good amount of electrolyte potassium. 100 ml of water has 250 mg of potassium and 105 mg of sodium.

Coconuts are grown in 80 countries from Brazil and Kenya to Philippines and Indonesia. Its water is exported in increasing volumes to markets, distributors and consumers around the world. With various brands being launched in the American market, swimmers have a wide variety of options to taste and test as the only hydration option used by endurance athletes that grows on trees.

Greater than is a sports drink powered by coconut water. Co-founded by Mark Sider, Greater than (Greater >) is exploding among American consumers at the same time it has discovered the community of open water swimming. “Greater > is a coconut water sports drink that was available to swimmers at the Big Shoulders event in Chicago. Greater Than is unique in that it offers different flavors in its coconut water hydration. It tastes great and the electrolytes are formulated to replenish exactly what your body needs when it is dehydrated.”