The Colors Of Open Water Swimming 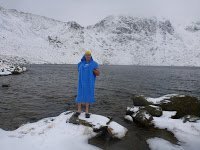 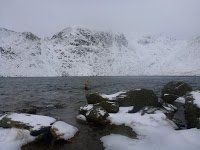 Color can provide a hint at the temperature of the water.

If it is white onshore, especially with a gray covering above, it is cold. Often bitterly cold, the welcomed venue for extreme swimmers.

“I swam yesterday at Red Tarn [in the eastern region of the English Lake District] with Helvellyn Mountain in the background. The water was 1.3ºC (34ºF), but to be honest it was the howling wind and driving snow which was my main concern for getting changed after the swim,” said the fearless Colin Hill who is about as extreme (passionate) as swimmers come.

Lewis Pugh describes the color of the water at the extreme ends of the earth, in Antarctica and above the Arctic Circle as dark, black as night. But by the looks of the 25m pools that are carved out of frozen lakes and streams, the darkness of extreme swimming can be found at most ice swimming venues.

On the other hand, the lighter colors of the Caribbean Sea (as seen off the shores of Grand Cayman Island on the left and the various shades of the waters of Cancún below) indicate an elevated warmth. In these lighter tropical waters, swimmers often smile with a soft purr of “aaahhhhhh…” when they walk into the sea versus a muffled painful moan of “arrrgghhhhhh!!!” when they dive into the darker, colder waters of more northern climes. 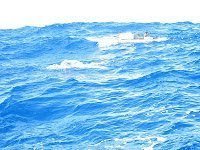 And then there is the inviting deep royal blue of the large lakes and in ocean channels that many people find the most comfortable compromise between the bitter cold of the dark and the brutal heat of equatorial waters.

Swim fast or swim slowly, the royal blue waters seems to match most people’s comfort zones most appropriately. The pure clarity of the water and the majesty of the blue provides the imagery that is often the object of photographs in magazines, books and films.

And then there is the dull, flat greenness of waters near large metropolitan areas and found in lakes, bays, bogs, swamps, dams, reservoirs, lochs, and rivers of various sorts around the world.

Former Serbian professional water polo player Darko Novovic who took 46 days to swim 5,450 km (3,386 miles) down the Amazon River in 2010 saw all kinds of shades and hues of blue, green, gray and black. Swimming an average of 16 hours per day in an improvised net cage, he spoke of his precautions and experiences, “I took three showers every day and took three protective vaccines. The Amazon is yellow some days and green the next.”