The Cuba Swim, Traditional Marathon Swimming It Is Not 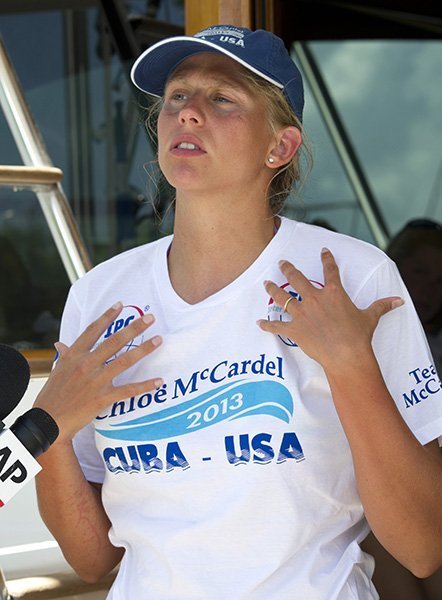 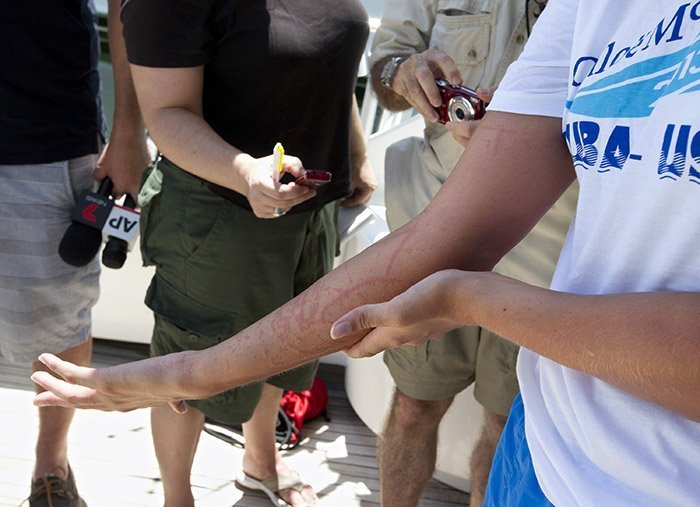 Australian endurance swimmer Chloë McCardel held a press conference less than 24 hours after painful box jellyfish stings forced her to abandon her long-anticipated swim from Cuba to the Florida Keys.

While the mainstream media from Australia to America made a much bigger fuss and paid significantly greater attention to the fact that McCardel was attempting to cross the 103-mile Straits of Florida without a shark cage, it was tiny creatures who did her in. And viewing from her jellyfish stings (see on left), McCardel encountered the same venomous animals as did Penny Palfrey and Diana Nyad in their previous attempts.

Few humans ever swim where these intrepid aquatic pioneers venture.

But their adventures are a real-world indication of the growing global proliferation of jellyfish. And the pain these nearly invisible night missiles of evil are indescribable; a searing not only of the flesh, but also a direct attack to the body’s nervous system. To describe stings from a swarm of box jellyfish as excruciating is to describe Mount Everest as high. In other words, the word excruciating only begins to tell part of the experience.

“My hips were locked, I felt like I was compressed, I felt paralyzed from the waist down, I couldn’t get any forward movement,” said the 28-year-old. “This was something I’ve never experienced and I hope never to experience again.”

Paul McQueeney and her support team made the decision to end the swim due to safety reasons. The crew pulled her from the water and immediately headed off to Florida concerned about her ability to breathe efficiently.

When she was enveloped with the barb-covered tentacles of the box jellyfish, she had only covered about 14 miles of her projected 60+ hours swim from Havana, Cuba to the Florida Keys.

During her sometimes tearful press conference, McCardel said that she has given up her dream of trying to accomplish the feat.

“It’s really important to me to stick to traditional marathon swimming, so most people just call it English Channel rules — bathers, goggles and cap.

And what I went through kind of magnified and exemplified that it’s not possible to swim those conditions in these waters,” she said.