The Day Heroes Crossed The Channel 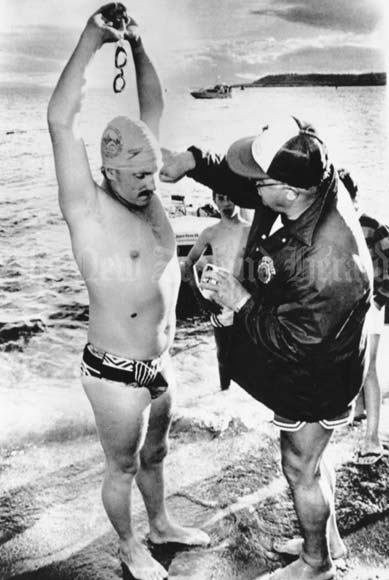 On and around September 9th 1985, a slew of renowned open water swimmers finally got their chance to swim across the English Channel.

The whole lot of them had been waiting for weeks for their chance to challenge the Channel.

“The day was overcast, but the water was flat,” recalls Sally Minty-Gravett who was one of those swimmers. “Two days before, the British Triathlon had a London-to-Paris relay so the French authorities came out in force. They purposefully slowed down the faster swimmers and wanted to get everyone together.”

“Rush, who was on a two-way, got through before the French came,” recalls Minty-Gravett. “But for the rest of us, it was more problematic. It took me 7 hours to finish the last 4 miles. I did not think I would finish. My dad had a torch in those days before lights and all. In the waves, the torch went overboard and I had to finish in terrible finish.”

Charlie Gravett recalls the memorable events that preceded this day. “Having been involved as an ‘observer’ in the London to Paris Tri [that occurred the day before]. The swimmers in the tri were not recognised as long distance swimmers, as we were called in those halcyon days, The swimmers left Shaky Beach and ‘swam’ to the first shipping lane.

Here they were ‘lifted’ from the water onto their escort vessels, taken across the two shipping lanes, and then dumped back into the French inshore zone. The French authorities obviously thought this as their trump card and tried to inflict these ‘rules onto the ‘genuine swimmers also on September 9th. Vasanti Niemz says, “Everyone who started from England that day was held up by the French coast guards in the middle of the Channel until the slowest swimmer – my humble self – had caught up. Philiph Rush – on his two way – just rushed through.”

Fortunately Sally’s Dad Leslie and Ray Scott, the then Chairman of the old Channel Swimming Association were on board Sally’s escort vessel and both being ‘fluid’ in French were able to state the case of the ‘genuine’ swimmers and allowed to continue unhindered by which time the swimmers who had been held up missed the expected tide and had to really battle to reach French soil.”