The Deep Enders Heading Towards The California Coast 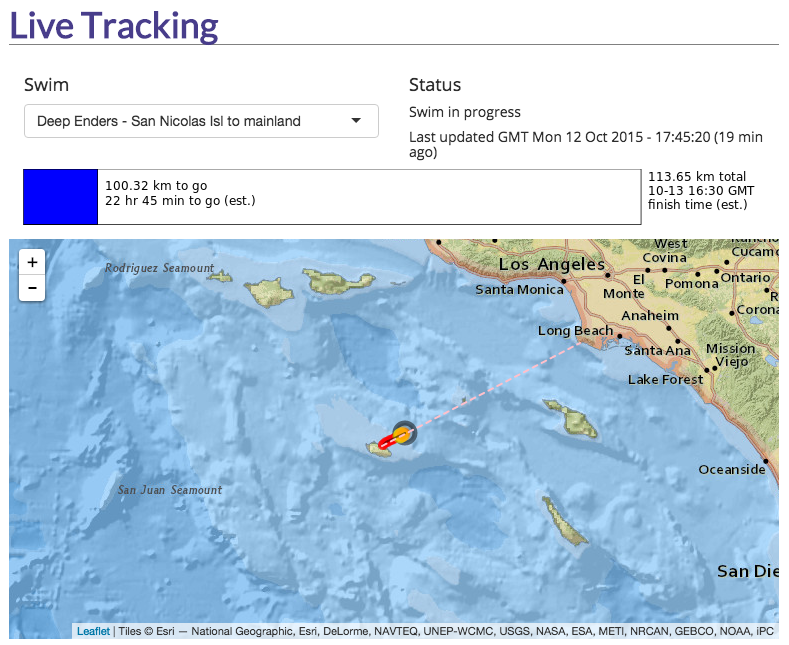 The Deep Enders Heading Towards The California Coast

The Deep Enders are a group of ocean-loving adults from Ventura, California [see below]. Six of them are currently swimming from San Nicholas Island to Point Vicente on the California mainland, in an unprecedented attempt at swimming 70.1 miles (112.8 km) to shore [see a screen capture of their SwimTrack above].

According to the SwimTrack [see here] provided by the Santa Barbara Channel Swimming Association (SBCSA), the team of Jim McConica (64 years), Tom Ball (55), John Chung (45), Zach Jirkovsky (34), Tamie Stewart (42), and Stacey Warmuth (59) has varied their speed between a low of under 3 km per hour and a high of 5 km per hour during the early part of their relay.

The swim could potentially take the Deep Enders at least 36 hours. All the while the seas are forecasted to be 5-7 feet.

Half of the team (Jim McConica, Tom Ball, and John Chung) were also members of the famed Ventura Deep Six team (including Kurtis Baron, Jim Neitz and Mike Shaffer) who set the then longest non-stop ocean relay record at 202 miles (325 km) from Ventura to San Diego along the California coast in 2010. The effort took 4 days 5 hours 39.53 minutes and was a logistical extravaganza and open water swimming operational milestone.

Theo Schmeeckle is the crew chief aboard the 63-foot Bottom Scratcher escort boat who will be on the lookout for elephant seals and their predators (Great White Sharks) and hammerheads.