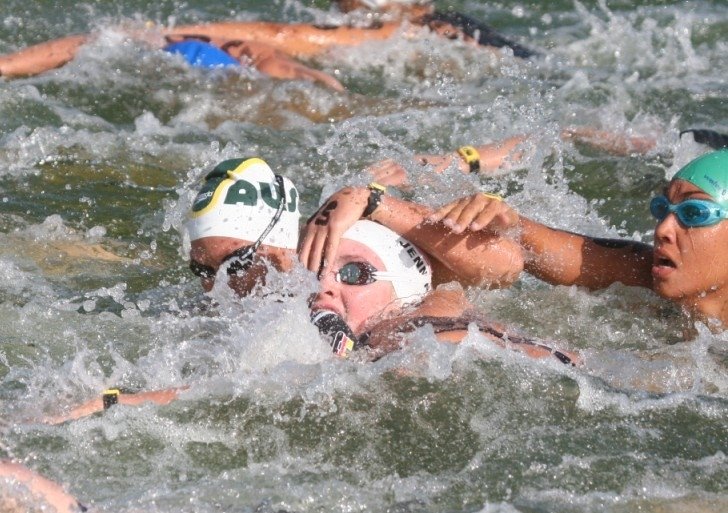 During our time on the FINA Technical Open Water Swimming Committee, we understood that the FINA referees made their decisions partly based on the actions and intentions of the swimmers.

While we understood that the ACTIONS of the swimmer in question (who impeded, pulled on a leg, or swam into another swimmer) was critical to the decision by the referee, it was the official position of FINA referees that both the ACTIONS and the INTENT of the swimmer in question were both essential elements in their decision to warn the athlete or give them a yellow card or red card.

We never understood how practically a FINA referee could make a judgment on the INTENTION – an internal mental process that leads an action – of the swimmers. We asked several questions to the FINA Technical Open Water Swimming Committee members:

* How could FINA referees understand what is going on in the minds of swimmers competing in a race while they are standing on a boat without communication between themselves and the swimmer?

* How can a pulling on a leg or an elbow to the face be unintentional? And even if it were unintentional, the victim of the pull or the elbow is still unfairly harmed during the competition.

* How do FINA referees determine intent? Are there visual cues or speed of action that differentiate the presence of intent or the lack of intent – especially in the latter parts of the race, around turn buoys or near feeding stations?

In other sports, referees judge rule violations and fouls by the action itself (e.g., blocking in basketball, tripping in fútbol, holding in American football, checking from behind in ice hockey), although the severity of the action may result in harsher penalties.

So why does intent play such a large role in the sport of open water swimming?

We think the actions of the swimmers should be the deciding factor in officiating open water swimming competitions. Intent should not play a deciding role as we believe it is impossible – or at the very least, very difficult – for referees on a boat to accurately know or even guess the intent of an athlete.

This approach follows the basic principles of American negligence law [disclaimer: this author is an American]:

As The Law of Torts (second edition) by Dan Dobbs, Paul Hayden and Ellen Bublick (2nd edition) explains, “A bad state of mind is neither necessary nor sufficient to show negligence; conduct is everything.

One who drives at a dangerous speed is negligent event if he is not aware of his speed and is using his best efforts to drive carefully. Conversely, a person who drives without the slightest care for the safety of others is not negligent unless he drives in some way that is unreasonably risky.

State of mind, including knowledge and believe, may motivate or shape conduct, but it is not in itself an actionable tort

The physicality of the most competitive niche of the sport is very clear.

David Davies, silver medalist in the 2008 Beijing Olympic 10K Marathon Swim, explains, “You are all swimming in a pack and you don’t have a lane to yourself so it is a very physical sport and you do swim on top of each other and get the odd fist in the face and that sort of thing. It’s the hardest thing I’ve ever done. Adapting to the tactics of it and the physicality of it and learning to swim in a straight line without having a blue line at the bottom of the river is obviously the biggest challenge.”

Cassandra Patten, a bronze medalist in 2008, has a similar perspective. “You’ve got 20-30 girls in close proximity and normally I’ll give them ‘three strikes’. I’ll let the first two go, but if I get hit a third time I might give them one back. I can look after myself.”

Comments are very much welcomed.

Photo by Javier Blazquez of Christine Jennings in the 5 km race at the 2008 World Open Water Swimming Championships in Sevilla, Spain. She is surrounded by Olympian Angela Maurer on her left, Olympian Melissa Gorman on her right, and Olympian Poliana Okimoto behind her.