The Doctor Is In (The Open Water) 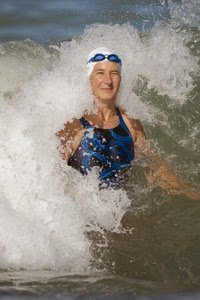 It was a charity swim for Good Shepherd Centres in Hamilton in preparation for her last leg of her planned Triple Crown of Open Water Swimming, the Manhattan Island Marathon Swim.

Korzekawa said by competing in the Manhattan race, she hopes to be the first Canadian to complete the Triple Crown of marathon swimming. She has already completed the English Channel (2011) and the Catalina Channel (2013).

She has also completed crossings of other two Muskoka lakes including Lake Rosseau (2009) and Lake Muskoka (2013) as well as swims in Lake Simcoe (2009), a circumnavigation swim in the Swim Around Key West (2012), and both directions (north-to-south and south-to-north) of Lake Ontario, Canada. Next stop: New York City.