The Doctor To Kickoff The New Year 24 Times 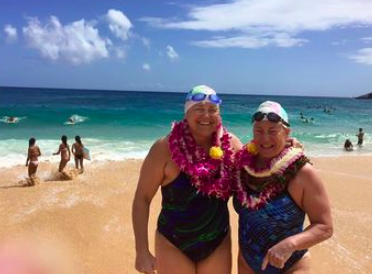 After participating on a relay team in the 2017 edition, Dr. MacDonald is heading back in the dead of winter to attempt the coldest ever Tampa Bay crossing. Race director Ron Collins predicts the water temperature will be 18-19°C.

Normally a sub-20°C swim in Tampa Bay for 38.6 km might bother many of the swimmers, but the 15-time English Channel swimmer should be able to handle the conditions.

Dr. MacDonald has completed three double crossings of the English Channel in 2001, 2004 and 2013 and was inducted to the International Marathon Swimming Hall of Fame in its Class of 2005.

“Although the entry deadline is in February, six solo swimmers and one relay team have already committed to the 20th Annual 24 Mile Tampa Bay Marathon Swim, scheduled for April 21st 2018:

The event is held each year to celebrate Earth Day and the revitalization of Florida’s largest estuary. For more information, contact Ron Collins at Collins@TampaBay.rr.com.

Photo shows Dr. MacDonald on left with Elizabeth Fry (on right) on Sandy Beach, Oahu after their tandem crossing of 17 hours 30 minutes across the 42 km Molokai Channel from Molokai Island to Oahu in Hawaii in April 2016.