The DQ Heard Across The World

The DQ Heard Across The World

When the IOC agreed to add the Olympic 10K Marathon Swim in 2005, one of the most celebrated and accomplished swimmers in the world at that time was famed Australian distance freestyler Grant Hackett.

Hackett started his Olympic open water journey at the 2008 Australian World Championship Trials [photo shown above] where he qualified to represent his country together with teammate Ky Hurst.

In Seville, Spain at the 2008 FINA World Open Water Swimming Championships which served as the first Olympic qualification race, Hacket and Hurst swam their own race and were in the lead pack throughout the qualification race. 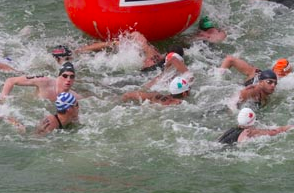 The mad sprint to the finish line at the end of the race by the top 15 swimmers was too jammed for the naked eye to determined who had qualified in the Top 10.

However, when the disqualification of Hackett, the Olympic double gold medalist in the 1500m freestyle, was announced, there were loud grasps from the crowd.

Munatones wrote for Swimming World Magazine, “One hour and 24 minutes into the race when there were still 45 men swimming over one another in the lead pack, Hackett was given a yellow card for impeding the progress of another swimmer during the third loop. Officially, he committed an infraction of FINA Rule 6.3.1 for interfering with another swimmer. After the infraction, a card bearing Hackett’s number of 35 was written by the Head Referee on a white paper and shown to the swimmers as an indication of a rule violation.

The second infraction was committed with less than 250 meters from the finish in the mad dash to the finish. Around the last turn buoy, there was a straightaway to the finish and it was anyone’s game to win and qualify for the Olympics – the dream of every swimmer in that lead pack of 15-20 men.

When the pace picked up with less than 1000 meters to go, Hackett was caught in the middle of the surging pack. With every stroke, unintentional collisions were made due to the close proximity of the swimmers to each other. As Hackett tried to create more space between himself and the swimmer alongside him, he apparently slowed down and tried deliberately to go over the back of Chip Peterson’s legs. Apparently, the degree of separation between Hackett and Peterson was not enough. Unfortunately for both swimmers, Hackett swam over Peterson in a manner that three referees believed impeded the progress of Peterson.

With the second violation, a red flag was raised and Hackett’s goal for competing in the Olympic 10K Marathon Swim was over – although Hackett – and the crowd – did not realize that during the race.”

“It is unfortunate that any swimmer is disqualified, but in my opinion, the Head Referee gave the correct decision,” explained Sid Cassidy, the then chairman of the FINA Technical Open Water Swimming Committee. “The call was confirmed by both Assistant Referees who were also in very close proximity to the infraction. All the referees are experienced international referees.”

The disqualification was protested by the Australian team, but the protest was ultimately rejected and the official results were issued.

Fortunately, the disqualification did not directly affect the athletes who earned the available spots in Beijing. Hurst who tied for fifth was ahead of both Hackett and Peterson at the time of the infraction and it was clear that Hurst was going to finish in the top ten. With Hurst’s top ten finish, Hackett had to finish in the top ten to earn a Olympic 10 km spot in Beijing. Hackett could enter the second qualifying race in Beijing held later for the same reason (i.e., Hurst getting into the top 10 in Seville). It was estimated that Hackett was in 15th position at the time.

Being the gentlemen sportsman that he is, Hackett later told the Sydney Morning Herald that “I just did not have it in the legs in the end and the decision not to compromise my pool program was a risk you take and in the end I was only two body lengths off the top ten. That is how close it is. But I am going to hold my head up and move on and get back and prepare for the pool program.”