The Fat Passion Of Kelly Gneiting 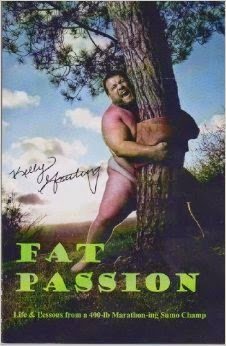 Open water swimmers are an incredibly interesting and diverse group of individuals.

Their lives unfold like a page-turning thriller, each chapter of their lives part of a long-running human interest story.

430-pound (200 kg) American sumo wrestler and open water swimmer Kelly Gneiting is one of these individuals. But he not only is a fascinating subject, he is also a prolific writer.

In addition to the 149-page Fat Passion, he has written The Book of Mormon’s Art of War, That Ye May Marvel, the 7 Epoch Shifts in Civilization’s Destiny with Will Christensen, The Bosoko Journey, Joey and Pepper and the King of Japan, The Legend of Grandpa’s Christmas Gift: And Three Other Short Stories, and The Man on the Other End of the Phone.

Fat Passion is described as, “Kelly Gneiting is heavier than the heaviest person to play NFL football, yet has accomplished superhuman feats. Some have even nick-named him “Fatman”, not as an insult, but rather as part of America’s collection of superheroes, with Superman, Spiderman, Aquaman, Iceman and Iron Man. Or maybe that’s incorrect…Regardless, the man has set the Guinness World Record for being the ‘Heaviest Person to Complete a Marathon’, a feat he accomplished three times! He’s also a 4-time United States champ and has qualified for the United States Sumo team for the last 8 years, competing internationally at the World Sumo Championships, World Games, and World Combat Games. Married for 18 years and still active in sumo, Kelly has 5 young children he doesn’t want to abandon by biting off more than he can chew. Follow the inspirational tale of a man making the most of his Earth-life experience. His secrets to success may catch you off guard! Is he crazy or spot on? “Fat man”, or Fatman, the superhero? You decide.”

“My goal is to make it [35.4 km or 22 miles] across Navajo Lake [from its southern shores in the state of New Mexico to its northern side in the state of Colorado],” says the Idaho-based Gneiting.

His GoFundMe page is located here.