The Feeling Of Finishing, From Fatigue To Felicity 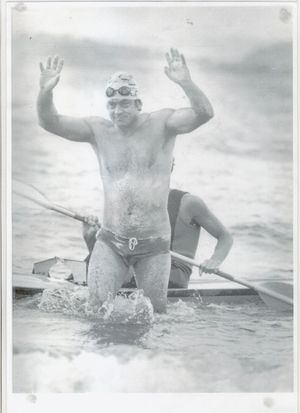 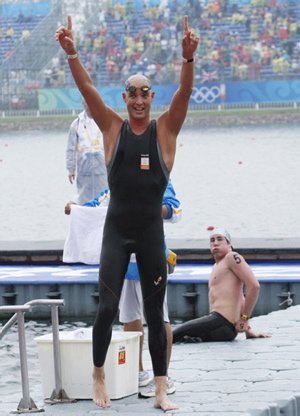 Whether it is passing under the finish archway in a mass participation swim like the Great North Swim, or a slow crawl up on the rocks after a channel swim in Catalina, how swimmers feel when they step up on the shore can widely vary.

At that moment of completion, some athletes free elation, others relief, and others satisfaction and pride. Others fall in the realm of disappointment, fatigue or pain. Some feel, inexplicably, nothing much at all until they have had time to soak it all in. We asked a number of open water swimmers of various backgrounds what they feel upon finishing.

Chris Guesdon, a coach, swimmer, administrator, and member of the International Marathon Swimming Hall of Fame, explains, “The words that come to mind on completion of an event are relief if it was solo adventure type swim, or elation if it was a race elation.”

Similarly, actress and endurance athlete Alexandra Paul feels “like woo hooo. I did it. Very proud of myself for sticking it out and relieved it is over too. But mostly Woohooo! That was fun!”

Kurt Ott, Race Coordinator of the Tampa Bay Frogman, says “It’s the complete attitude change when crossing the finish line. During a competitive race when pushing myself, lungs burning, swallowing salt water, shoulders aching, sometimes I question why I am doing this. Then as I cross the finish line my immediate thoughts are, that was so awesome and fun….can’t wait to do it again.”

Olympic swimmer Benjamin Schulte explains his feeling, “When I hit the finish pad, I feel fine for a split second. Then all the pain and soreness and effort rushes into me as though it’s been trailing just on my heels the entire way. Sort of the way it’s like the sound trails an airplane when it’s flying high and at high speeds, then kind of catches it when it gets closer to the ground and slows down.

When I’ve finished, I think to myself “Ooooh thank God that’s done.” I feel like all the stress from preparation and training can be put on hold for a little bit, and I can enjoy the rest of the day with the satisfaction that I’ve finished and a good dose of relaxation is coming my way
.”

For Dave Barra of the 8 Bridges Hudson River Swim, the end result is long-term. “For me, the greatest excitement comes during the moments leading up to splash time: checking all the feeds, the conditions, trying to stay loose, making sure all the crew are solid in their roles, etc. Nothing is guaranteed, nothing is certain.

The first thing I feel after landing is extreme gratitude for the efforts of my crew. I’ve watched them suffer through many hours of continuous chop in tiny boats, charged with the responsibility of staying alert while I get to zone out. 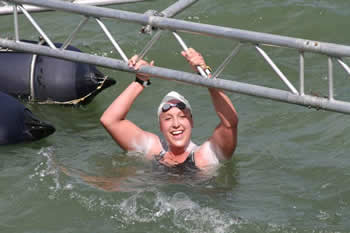 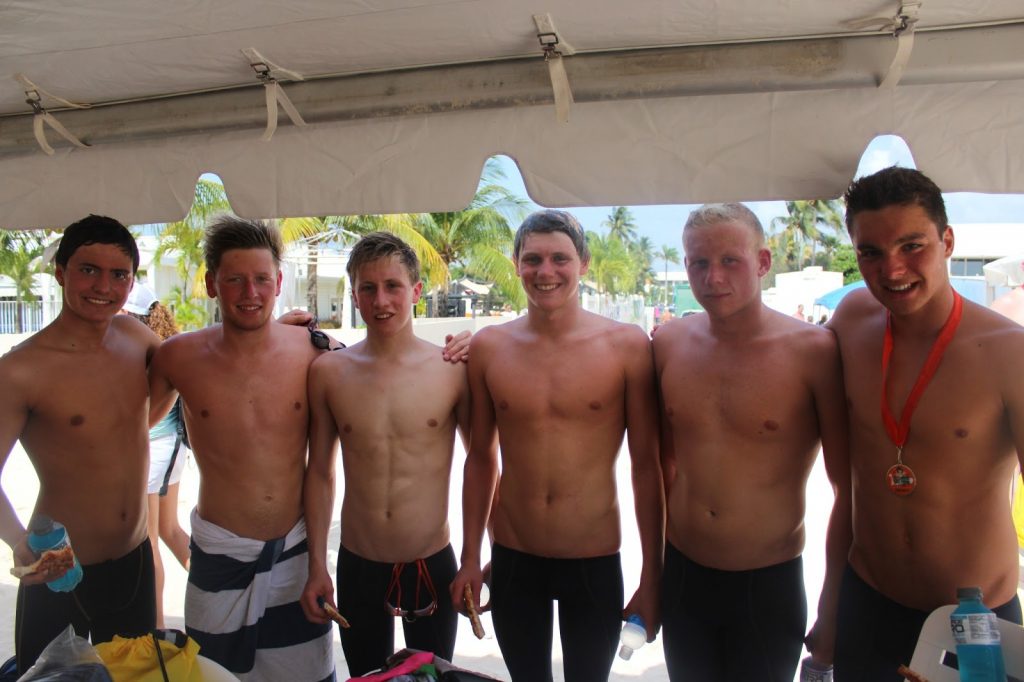 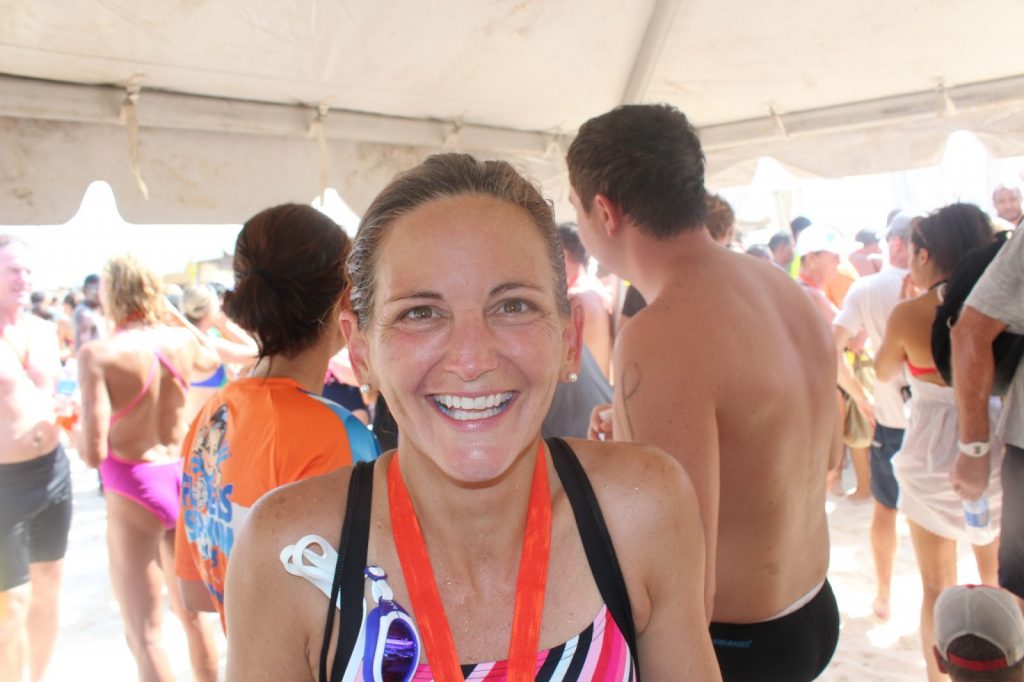 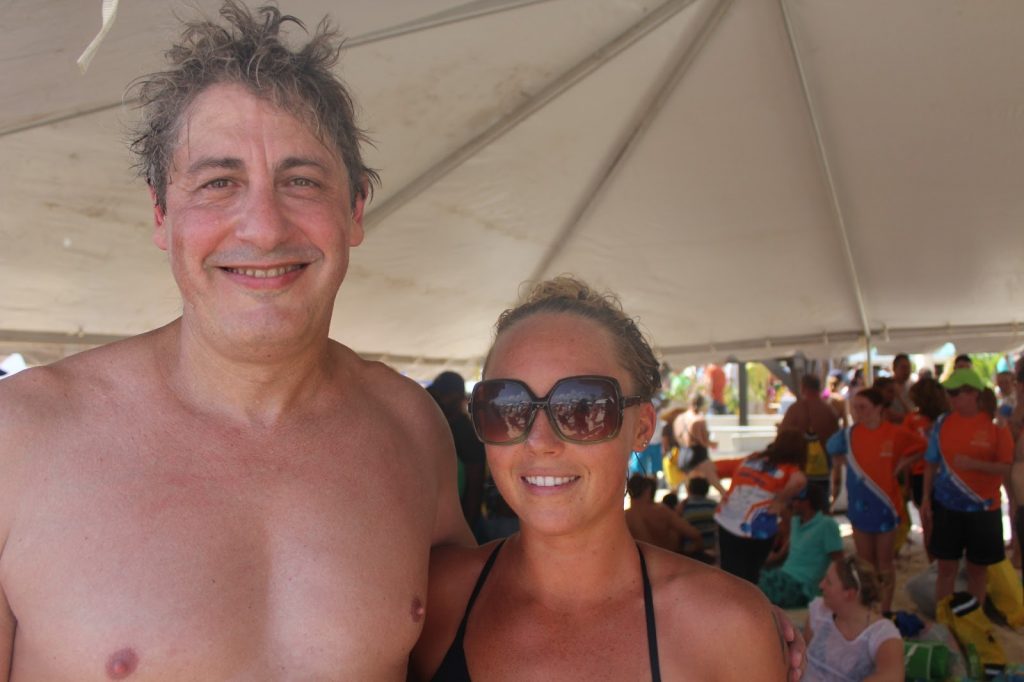 Often, the whole team is too exhausted to even participate in a celebratory meal. I often feel a post-swim melancholy for several days while I process the whole experience

Adam Walker en route to the 7 channel swims of the Oceans Seven, describes his thoughts, “I feel relieved and overjoyed that I have achieved my goal. As soon as it’s over I enjoy the moment but turn my sight onto the next challenge. I feel it’s important to set the next goal and keep moving forwards.”

Carina Bruwer, a marathon swimmer from South Africa, says things are more unpredictable. “That feeling is nothing I can ever predict. It has ranged from absolute elation to disappointment; from extreme exhaustion to wanting to turn back for a double after a 35 km swim.

I have done big swims which I have worked towards and dreamed of for years, where I would have expected to have felt absolutely elated and on top of the world, but in the end I felt relieved more than anything else. This was the case with the English Channel, actually. The elation and gravity of what I’ve done only sank in later.

Then there have been swims like crossing False Bay, which I also obsessed about for years, and had one failed attempt due to hypothermia. I was overwhelmed by emotion when I finished this swim in 2006. I still remember seeing the dozen or so people waiting for me on the slipway – these included some close friends, some media and some swimming enthusiasts, feeling them waiting for me; speeding up into a near-sprint for the last km after a 10 hour swim, and shaking from excitement (not cold, for a change!) and emotion when I finally felt the sand under my feet and heard the applause.

And in my recent swim around Cape Point, I was so close to being unconscious from hypothermia, there was no room for any emotion whatsoever. I can remember it feeling very right though.

I remember it probably because I did the swim for child cancer which was the first time I’ve swum for a cause. I truly had no aspirations of breaking records or anything like that; it was something I had to do for the organisation, and for my own journey as well. Again, in retrospect, I am filled with pride and contentment about that swim
.”

As for processing the whole experience, Ben Lecomte who swam and drifted across the breath of the Atlantic Ocean describes his feeling at the end of his Atlantic swim. “As I stepped on the beach in France, I felt an immense sense of completion and fulfillment, and was overwhelmed.

It was a mix with a feeling of physical and mental pain that I could not put aside as I said: “never again!” But as we know now, it only took me few months to change my mind and set it toward my next swim
.”

Jennifer Figge who also crossed the Atlantic Ocean and done a variety of month-long stage swims is similar in that the finish leads to another start. “There is a lot of water out there to keep me busy. When I finish and have sand in my hands, the feeling is I am here,and I wake up the next morning, sort of knowing that I accomplished it. The feeling of finishing an ocean crossing is that … I never want to finish. It is difficult when I know that land is near. There are many signs. The frigate birds can only fly 600 miles, so when the birds show up, that’s how close I am. I never see the contrails (vapor trails) of airplanes flying over the Atlantic, but when they appear land is near. Also, you can smell land, the trees, the specific humidity in the air, it is different. It is the end. And I don’t want to look at it. I just want to start all over again!”

Darren Miller who has completed 6 of 7 Oceans Seven channels has another perspective. “When completing a marathon swim, I tend to have a feeling of exhaustion and excitement at the same time – they sort of level each other out in one euphoric moment. The pain during the ‘final push’ is so high, yet the feeling of wanting to finish drives the spirit to ignore the pain at the end. I tend to be more on the conservative side with my energy until the final miles, so I always have something left in the tank to make a strong, hard push at the end.

Two swims in particular, Molokai and Tsugaru, were very difficult at the completion due to having to push particularly hard during the final few miles in order to not be ‘swept’ in the wrong direction and leave finishing a distant memory. I believe the thought of not completing something is what drives me the hardest, as I never want to know what that feels like.

When I return to ‘normal life’ after these incredible adventures, I often struggle with completely understanding what it was that my team and I completed. I don’t know if this amazing journey will ever sink in – it just feels like a dream sometimes

U.S. Masters Swimming national championship race director Bill McCracken explains the difference in finishing various types of swims. “I just finished a 5 km training swim this morning at lake Del Valle. As I stepped out of the water, I felt a great amount of relief that my swimming partner and I finished without any incident. Safety is key and I was glad I got out before all the pleasure boats got going. Shift gears to the 5 km race at Del Valle two weeks ago and I finished with a huge smile on my face. Happy that I swam well and see the joy on so many other competitors in finishing.

Fast forward to Maui Channel Swim or Trans Tahoe Relay. I am always invigorated by the beauty of the body of water. I anxious to find out how I did. Did I catch up to the boat in front of us. Did I put space between us and the time behind us? Did I do my part for the team? It’s always a thrill to participate in team relays
.”

As Bruwer sums up, “Finishing is that moment one works towards, but some of my most memorable and rewarding moments and memories are of hitting that zone in the swim – it can last the whole swim, or it can be a fleeting moment when you’re reminded of the beauty of the ocean, of nature and of the sport, and the resilience of the human body and soul. Phew, what a sport!”