The Female Tradition Continues In The Cold Water 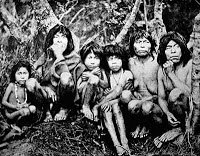 According to Dr. Jolie Bookspan, cold acclimatization is a well-documented process of gradually increasing the body’s resistance to cold through regular cold exposure.

In Acclimatization to Diving in Cold Water, Dr. Bookspan noted examples of cold acclimatization: the native peoples of the African Kalahari, the Australian desert, and Tierra del Fuego in Chile.

In Chile, the hardy Yaghan people reportedly wore no clothes at all despite temperatures that were cold most of the time and cool at best.

These were very strong women whose contemporary female counterparts in the modern ice swimming and marathon swimming world continue their tradition of swimming fearlessly in the cold.