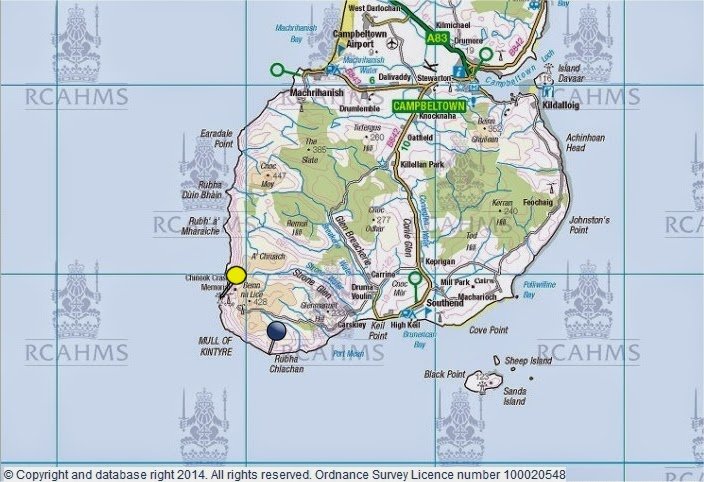 Historian and author Angus Martin was interested in the Dál Riata Channel Swim (otherwise known as the Mull of Kintyre Swim) by Wayne Soutter in the North Channel.

Interestingly, Martin uncovered evidence in The Campbeltown Courier newspaper of July 27th 1878 of an attempt by Frederick Cavill (shown on left) who attempted a swim in 1878 along the same course that Soutter completed a crossing in 2012 (the yellow and blue pins in the map above show how close the start locations of the two swimmers were).

Cavill, a member of the International Marathon Swimming Hall of Fame and an accomplished swimmer, made his attempt only 3 years after Captain Matthew Webb crossed the English Channel. Cavill made two attempts of the English Channel in 1876 that came tantalizingly close to succeeding, and later moved to Australia where he did a number of unprecedented open water swims as he raised 9 children who all swam well.

…a sudden break in the weather, which bids fair to remain unsettled until after the neap tides, prevented Mr. Frederick Cavill starting on his adventurous journey across St. George’s Channel on Wednesday morning. This came as the climax to several disappointing circumstances which had marred the stars on previous days, and justified Mr. Cavill in adopting the counsel of his friends to postpone his attempt till the neap tides of August.

Up till eight o’clock on Tuesday evening there was a prospect of the start being made under tolerably favorable conditions. The programme, as then arranged, was to run down in the course of the evening from Sanda Island to Seas Point, a headland between two and three miles south-east of the Mull of Cantyre, and for Cavill to enter the water there about 3:30 A.M. on Wednesday.

It was understand that this would give him some two and a half hours of the flow, and enable him to get well out from the land before meeting the ebb-tide, carrying him to the north-west in the direction of Rathlin Island, leaving it for the succeeding flood to bring him south again in the neighborhood, it was hoped, of Fair Head or Tor Point.

Although the distance from coast to coast is only 12.5 miles, and the straight course from Deas Point to the Irish coast about 16 miles, the passage of the Channel at this part is exceedingly hazardous, and forms perhaps the severest test of the endurance of a swimmer that can be found round the British Isles. At spring tides the current sweeps from the northward through the narrow entrance to the Irish Channel at a rate of nearly six knots an hour, and even when the tides are feeblest runs from two to three knots. From this cause alone it was computed that Cavill would have to trace from 25 to 30 miles to cover the distance from point to point. The temperature of the water, too, is very low as compared with that in the English Channel, thermometric readings during the last three days of exceptionally hot weather ranging from 52 degrees, considerably below the average temperature in the Dover Straits at this time of the year.

To guard against the deadly chill from which he must otherwise have suffered, Cavill proposed to use a bathing dress of his own invention. It is made of India-rubber, and takes the form a short-sleeved, light-fitting guernsey, and bathing drawers. Under this is a warm woolen guernsey, and under this again a guernsey and drawers of thin muslin, plenteously anointed with Russian tallow to retain the natural heat of the body. Everything was in readiness on Tuesday evening when the little party accompanying Cavill put out from Sanda, in Mr. Ritchie’s boat Isle of Sanda, which was to accompany the swimmer on his journey. Crossing the sound, the party encountered haze, the wind coming in puffs from the south-east. On making the mainland, it was deemed advisable, in consequence of the mist, to put into the little bay near the hamlet of Southend in preference to running along the coast to Deas Point. The lifeboat station there gave facilities for welcome rest for two hours, while the incoming tide would enable the party to reach the starting-point from the lifeboat house in half an hour. Before two o’clock in the morning, however, the weather had unmistakably changed for the worse. Warning spots of rain fell, and the wind was blowing half a gale from the southward.

The sea was coming in heavy rollers, and the boatman at once declared that it would be impossible to land Cavill at Deas Point through the broken water. He was greatly chagrined at this unforseen obstacle, but the experiences of the next two hours made it plain that a successful issue to the journey would be impossible under the circumstances. Smart showers came, with a freshening wind, and the appearance of the sky, as the day dawned in gloom confirmed the apprehensions that the weather had broken, and that the chances were dead against a start for the next few days, when the advent of stronger tides will form an almost insuperable bar to further attempts for three weeks or a month.

Anxious consultations were held in the course of the morning as to the likelihood of the weather moderating sufficiently as to allow of a trial by the afternoon tide, but it came dirtier every hour, and Cavill was at length compelled reluctantly to abandon for the present his self-imposed task. He was justified in this conclusion no less by the business engagements which prevented the presence of all but one or two of the gentlemen who had promised their countenance to the undertaking, and by the hopeless view of the weather taken by the party accompanying him to the coast, than by discouraging appearance of the elements. However, he proposes to fulfill some engagements in England which will occupy him for the next fortnight – notably, a projected swim round the Isle of Wight, and then, if practicable between Cantyre and Ireland. He returned to Glasgow on Wednesday, on his way to his home near Birmingham.