Adrian Sarchet, The First Guern From Europe To Africa 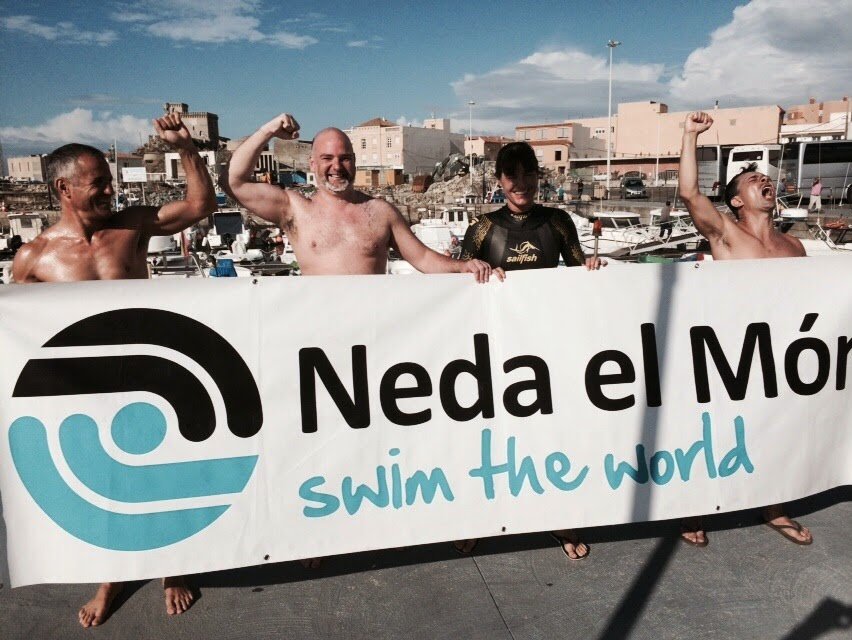 Adrian Sarchet is a 39-year-old Advocate from Guernsey, one of the British Channel Islands.

With his recent 4 hour 1 minute crossing of the Strait of Gibraltar, Sarchet has now completed 3 of the 7 channels in the Oceans Seven and is gearing up for four more.

Besides his English Channel and Catalina Channel crossing, Sarchet is the only native of Guernsey to complete a 21.1 nautical mile circumnavigation around the island of Guernsey and the first Guernsey native to complete a Round Jersey Swim.

Sarchet started his Strait of Gibraltar attempt at Tarifa in Spain and finished at Cires Point in Morocco.

But his road to Morocco started months before. “My first challenge was to get myself on the Asociacion de cruce a nado del Estrecho de Gibraltar list to attempt the swim in 2014. I am embarrassed to say that I failed this introductory challenge because the list opened unexpectedly early and closed unexpectedly quickly.

However, a Spanish swimming organisation called “Neda el Món” (nedaelmon.com) which held 16 places on the 2014 list to be swum in four groups of four swimmers. Neda el Món agreed to let me try out for one of their groups
.” 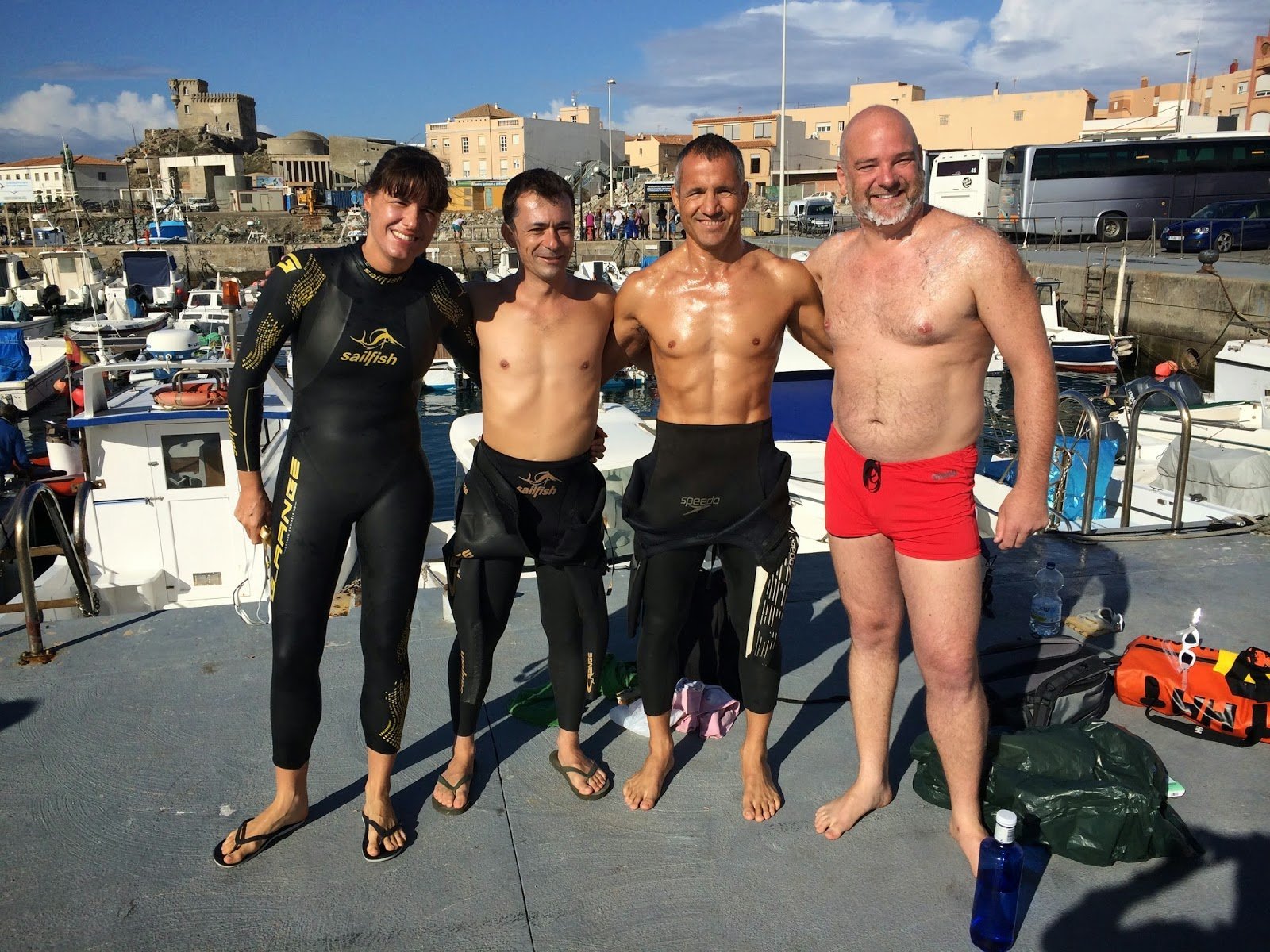 The selection process included completing pool-based time trials with Sarchet’s coach in Guernsey and submitting the results to Neda el Món. Then Sarchet had to travel to Badalona, near Barcelona, in May and September for sea-based time trials.

Sarchet learned that although the Strait of Gibraltar is the shortest Ocean Seven channel, tidal, current and weather factors dictate that it is swum at a fast pace. “A pace outside my usual comfort zone,” he described.

“To make matters worse, unlike me almost all the Neda el Món swimmers attempt their crossings in neoprene racing suits, an option not open to me as an Oceans Seven swimmer. [The governing body] ACNEG also enforces a rule that if one swimmer falls off the pace of the group, that swimmer will be removed from the water so as not to jeopardise the group’s chances of completing the swim.”

So Sarchet shifted gears and focused on developing his speed “Many hours were spent in the Ladies Pool at the Bathing Pools in Guernsey, a 50m sea-filled open water pool, swimming sets of 100 metres and 200 metres against the stop watch dutifully manned by my father come rain or shine. In January, my ‘forever stroke’, the stroke that I can maintain indefinitely, was paced at a little under 2 minutes per 100 metres. By September, this had dropped to around 1 minute 45 seconds per 100 metres.”

Come summer, Sarchet was regularly completing a set of 100 repetitions of 100 metres at his newly found 1:45 pace per 100.

In June, Neda el Món confirmed that I had a place in the second group in the second week of their exclusivity period. “But the nagging doubt remained … would I be fast enough, or would I face the dishonour of being removed from the water for being too slow?“

His fears were unfounded. Or at least diminished with his hard training.

“I have often heard the wisdom of the waves say ‘Train Hard, Swim Easy’, but I have never understood it until this year. But on this occasion the adage was absolutely true and I had a beautiful, stress-free swim.

Neda el Món took away the usual stress of organising a marathon swim and arranged all the national fights, transfers, and an excellent hotel and also liaised with ACNEG on my behalf. Neda el Món also provided experienced crew to administer feeds during the swim so it was not necessary to take any crew with me. From an economic perspective, the cost of attending a couple of training sessions in Badalona, was easily outweighed by the cost saving of not having to bring a crew to Spain with me. More importantly, Neda el Món fostered a family feel within their swim groups and assisted with breaching the language barriers inherent in having swimmers from all over the world including Spain, France, Italy, Colombia and Guernsey to mention a few
.”

The family feel started to get real when Sarchet heard about the experiences of Neda el Món’s first group. ACNEG removed the group of 4 from the water for 10 minutes during their swim while a 3-meter hammerhead shark circled their area. After the shark cleared the area, the swimmers re-entered the water and 3 out of the 4 swimmers ultimately completed their swim.

“The following day [of the shark encounter], my group got suited up and I got greased up. We mentally and physically prepared for the swim, motored out to the start point and were awaiting the instruction to enter the water, when the pilot received an updated weather forecast and called the swim off. With adrenalin coursing through their veins, some members of my group were disappointed with this news, but I was entirely chilled having learned the hard way that you always trust your pilot. A few hours later, when strong winds (Force 5/6) came out of nowhere to chop up the Strait, I knew that my faith had, once again, not been misplaced.”

His faith and patience paid off.

“We awoke the next day to a perfect swim day. The wind was a westerly Force 3 and the sea state was slight. My group retraced now familiar steps and we once again found ourselves waiting for the instruction to enter the water. This time we received it, entered the water and swam to the start point.

The temperature of the water in the first kilometre was about 16ºC, but this increased to about 21ºC in the middle of the swim before dropping again to 19ºC in the kilometre closest to Morocco.

Apart from a bit of chop in the first half kilometre, the first three hours of the swim were simply beautiful, clear blue skies above, incredible visibility in the azure waters below, a swim group perfectly attuned to each other and, for me, totally effortless swimming

His joy was about to be amped up. Like many others, he was Walkerized.

“The day also allowed me to experience one of my greatest wishes – to swim with wild dolphins – when three large adult dolphins swam right below us, almost within touching distance, as we closed on the Moroccan coast.

In the final hour I did have to start working to stay with the group as the benefits of their racing suits started to tell, but we maintained formation until the last 500 metres or so, when some confused currents off Cires Point fractured our formation a little. We re-grouped 20 metres off Morocco and waited a couple of minutes for the final member of our group, before finishing the swim together.

A couple of minutes later two Frenchmen, an Italian lady and a Guernseyman climbed onto the Moroccan shore

And what is next?

“As I stood on the shore and looked back towards Europe, I did allow myself a moment to wonder how different my 2015 Oceans Seven challenge would be – the notoriously cold, hard and jellyfish-filled North Channel crossing from Ireland to Scotland.”