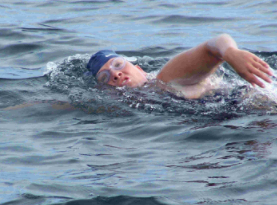 Between the ages of 17 and 30, Canadian swimmer Paula Stephanson swam across all five Great Lakes.

Her longest swim – 25 hours 38 minutes – was her last one in Lake Michigan.

But her first swim – 22 hours 30 minutes to traverse 50.5 km across Lake Ontario – was also a long one. Her achievement replicated the Great Lakes odyssey of fellow Canadian marathon swimmer Vicki Keith (completed in 1988).