The Greatest Olympic Upset In History 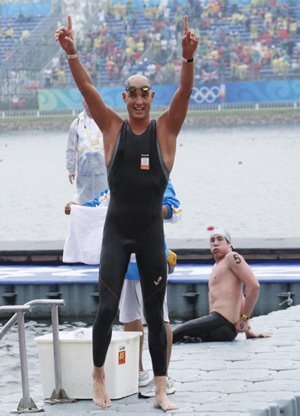 In the build-up to the 2016 Rio Olympic Games, Swimming World Magazine is presenting its top nin upsets in Olympic swimming history – 9 unexpected and unimagined victories by athletes with incredible stories of triumph.

Swimming World Magazine’s history began with its November 2015 issue and will continue through its July 2016 issue, one month before the start of the Olympic swimming events in Rio on August 6th.

#7 was Anthony Nesty beating Matt Biondi in the 100m butterfly at the 1988 Seoul Olympics.

But we cannot imagine, from our perspective as open water swimmers, of any upset that is greater than Maarten van der Weijden‘s victory in the Olympic 10K Marathon Swim at the 2008 Beijing Olympics.

* Maarten had fought back from leukemia, the only known swimming Olympic finalist who was a cancer survivor
* At one point, Maarten had lost nearly half of his body weight during his illness
* Maarten was competing against world champions like Vladimir Dyatchin and Thomas Lurz
* David Davies, the eventual silver medalist, had a 1500m freestyle time nearly 1 minute faster than Maarten’s best time in the pool
* Maarten was willing to publicly share his workouts and strategies with anyone who asked

But Maarten had the pedigree, racing savviness, and self-confidence to pull off an upset victory at the Shunyi Olympic Rowing-Canoeing Park outside of Beijing. In fact, very importantly in his own mind, a victory would not be an upset, but rather an outcome of his hard work and tactical decisions throughout the race.

Despite his bout with cancer, Maarten had a lot of positives going for him:

* Maarten elected to wear a blueseventy techsuit that was against the rules of the Dutch team, but its construction at the time was arguably the best materials for an open water swim
* Maarten was racing in the rain, making the conditions as cool as possible during the humid summer conditions in a rowing basin
* Maarten was confident that he could out-swim anyone in the last 5, 50, or 100 meters in the race; he had trained himself to be the best sprinter of the 25 finalists
* Maarten took the time to be very well-hydrated throughout the race, drinking at every feeding station
* Maarten strategically drafted off the end of the lead pack for over 9 km, conserving his energy for the dramatic finish

But there was one thing that Maarten had that no one else could ever imagine. “You can do anything you want after surviving cancer. If you have cancer it is not the end, if you are lucky there is a whole world out there for you still.

Before the Games I fantasized about winning the gold medal, because you have to fantasize 100 times about something before you can win it, I was thinking I would be jumping up and down or screaming, but when it came to it, I just finished and felt amazed.”

Right before the Olympic final, the ambiance of the 10 km marathon swim also very much suited the engaging and garrulous personality of the 2.03 meter Dutch swimmer. American rival Mark Warkentin remembers, “The story of the day starts about 5 minutes before the announcer said ‘Take your mark…’ Unfortunately, athlete family members and other 10k swimming fans were relegated to seating areas far from the start location and so the 25 athletes stood on the waters edge waiting to get introduced to the members of the media. The excitement of being announced to an Olympic crowd was thus diminished greatly but we were all preoccupied with the task at hand. That task was not the upcoming race, but rather the need to relive ourselves of a full morning of hydration.

Prior to the introductions the athletes had been sequestered in a ready room, then herded to the starting location, and then told to stand at attention in front of the cameras in the media section. The whole process took about 20 minutes and by the time the athletes were finally introduced the only thing we really wanted to do was find the restroom, which of course was not an option. Thus, there was quite a bit of eagerness to get into the water as quickly as possible. At the beginning of the historic race, levity triumphed over tension at the starting dock.”

During the first lap of the four-lap race, Maarten simply settled into this familiar position at the back of the pack. His stroke count appeared to be the slowest of the group. target=”_blank” While others raced through the feeding station and quickly gulped their drinks, Maarten took long, slow swigs from his water bottle to ensure that he remained well-hydrated. While others rushed, Maarten was as calm as an athlete could possibly be, especially as a lot of physicality was occurring in the front and middle of the pack, especially around the turn buoys. Maarten simply avoided the jostling.target=”_blank” Warkentin remembers, “At the start of the second lap I was the unfortunate recipient of an elbow to my shoulder blade that hurt. I don’t know who it was that got me, but I must have made an aggressive retaliation move because I was given a yellow card a few moments later. I was a bit confused about what I had done to get a Yellow Card, but there really isn’t any time to get an explanation from the official. The only thing you can really do is adjust your race strategy accordingly, knowing that a second infraction will result in a disqualification from the race.”

But Maarten continued to trail behind the pack, unperturbed by the referee’s whistles, yellow cards, and physicality in front of him. World champion Dyatchin took the lead on the third lap as the pace started to increase. The pressure to take the shortest line was concurrently increased. Warkentin explains, “On the third lap, [Dyatchin] and I were battling for position. 25 meters until the turn buoy we were side by side. I had an inside position – which is technically the better position – but the Russian was making it clear that he was going to try and angle me inside the course. His goal was to try and slam me into the buoy instead of going around it cleanly. I knew what he was trying to do and, under normal circumstances without a Yellow Card, I would have held my position. However, holding position would have required a lot of physical contact, and I didn’t want to draw the attention of the race officials. So, I backed down, lost my position, and had to try and scramble to get back into the thick of the pack.”

While his opponents were fighting for position and the lead, Maarten continued to draft with a level of composure that few others possessed.

At the start of the fourth lap, the pace picked up tremendously. The heart rate of the athletes skyrocketed and their smooth technique started to deteriorate a bit. While some of the athletes started to make quick moves, Maarten was now moving gradually up the pack, picking off one rival at a time. But the 9.5 km mark, Maarten was swimming shoulder-to-shoulder with Warkentin. They both were in a position to medal, although there were still a handful of swimmers ahead of them. “We fought like crazy from the 7.5 km mark to the 9.5 km mark to [be in the hunt for a medal], but I kept getting tangled with Maarten, Vladimir, and a whole bunch of other swimmers,” recalled Warkentin.

As Dyatchin was red-carded and the others had used up most of their energy, Maarten quickly surged to the front in an attempt to catch the leading David Davis of the UK and Thomas Lurz of Germany. How composed was Maarten? At a level that was unfathomable to others in the inaugural marathon swim. “Just before the pace picked up at the 7.5 km mark, I was swimming next to Maarten when he smiled at me and made eye contact [through his goggles],” said Warkentin. “It was only a split second of a grin, but it was noticeable, and it made me shake my head and laugh a little. That moment, just before the pain really increased, was one of the highlights of the race.”

Before the race, Maarten had predicted his profound racing strategy in the Olympic 10K Marathon Swim: Maarten sat in the pack, patiently bidding his time for the first 8,000 meters, 90 focused minutes of controlled and patient swimming behind a pack of aggressive swimmers. Then, he shifted gears and started to gradually edge up within the lead group, always carefully picking spots where he was able to gain a meter here and another meter there. Finally, in the last 500 meters he moved into position for a medal, but by all reasonable measures, Maarten seemed way too far behind leader David Davies to win.

With 100 meters to go, the course took a slight angle towards the finish pads and Davies got a bit confused as to the best line, giving Maarten the opening he needed.

Maarten said, “…I knew that I could swim faster than these guys in the final 100 meters. So my strategy was to be patient for the first 24.9 kilometers and save something.”

Even silver medalist Davies, a rival who also swam the race of his life only to miss out on a gold, was very complimentary of Maarten, “He’s a gentleman and a great ambassador for the sport and he’s Olympic champion now.”