Moreno, The Heart And Soul Of The Ría De Navia 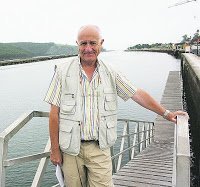 For 55 years, the annual Descenso a Nado Ría de Navia has continued in the small town of Navia in Asturias, Spain. The event is an ingrained tradition on the social and athletic calendar in the area, drawing everyone from world champions and Olympians to swimmers from Europe and America of all ages.

But such an event just doesn’t happen. It is shaped by the community and driven by hard-working volunteers. The fuel that enables the Descenso a Nado de la Ría de Navia to happen year after year is the deeply passionate Juan Ignacio Martínez Fernández-Villamil.

For 55 of its 55 consecutive years, Fernández-Villamil whose nickname is Moreno has put his big stamp on the event. “I started out when I was young about 16,” recalled the man who is called the heart and soul of the Descenso. “I was a volunteer and then was given more and more responsibilities. At the end of every year, we ask ourselves if we can do it again. It is important to continue this tradition for the next generation.”

Fernández-Villamil is justifiably proud of his work that has enabled the word “Navia” to become known to the Spanish, European and international communities. Like Midmar, Tiburon, Windermere, Roberval and Rottnest, Navia is a name of a small town in a picturesque setting that has entered the lexicon of open water swimmers worldwide.

Fernández-Villamil knows the small army of volunteers that help make the event happen without a hitch. There are months of planning for an event that is essentially free to registered swimmers. “There are 150 volunteers who dedicate many hours over months leading up the event. The young people not only volunteer on race day, but also for the all the events like the parade and dance that happen before the Descenso.”