The Human Body Is A Wonderfully Adaptive Organism 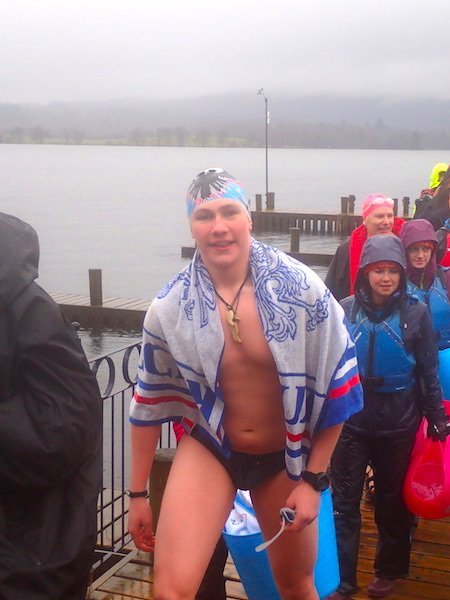 This decision was primarily made because of safety concerns among FINA Bureau members who were evidently worried about hypothermia among the professional competitive swimmers who participate in FINA competitions.

But the human body – when properly trained – is remarkably adaptable.

17-year-old Danil Brylin from Siberia, Russia is one extreme example of how adaptable the human body truly is – and why hardening – just like interval training and development of navigational IQ – should be part of any open water swimmer’s training regimen if they want to be competitive or successful on swims conducted around the world.

Most recently, Brylin competed in the 450m race at the 2016 Big Chillswim Winter Swimming Gala in Windermere, England. “I really enjoyed swimming in the lake waters in the UK which was nice and warm. The competition was enabled be a very good organization.”

Nice and warm can be relatively defined, especially when the water in Windermere was 6.4ºC (43.5ºF).

But Brylin has been around cold water swimming all his life. “I first swam when I was 2 years old in 5ºC (41ºF),” explains Brylin. “From that moment, I started to harden [my body] slowly. Then I experienced additional hardening when I started swimming in competitions.

The name of his club is Akvais in Far East Russia where he has also competed in ice swimming competitions on the Chinese-Russian border and participated in a cold water relay in the eastern part of Russia: the Kamchatka-Kuril relay.