The Juniors Are Hungary To Race, Anton Evsikov Wins 7.5K 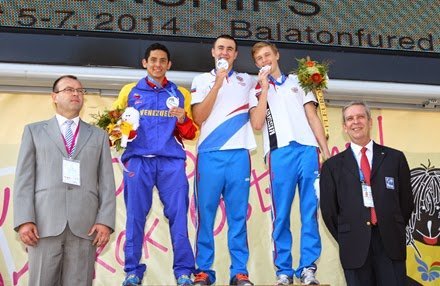 After FINA cancelled its second FINA World Junior Open Water Swimming Championships in Eilat, Israel, the world’s next generation of great open water swimmers and their coaches started planning to visit Balatonfured and to compete in Lake Balaton in Hungary.

The schedule is as follows:

Russia’s Anton Evsikov won the opening event at the 2nd FINA World Junior Open Water Swimming Championships that were held under sunny skies after a shower dropped the water temperature to 19ºC (66ºF) and winds kicked up some turbulence.

Once Evsikov broke from the lead pack, Venezuela’s Diego Vera took off after him. The last 400 meters was a mano-a-mano sprint, but the Russian finished 3 seconds ahead of Vera. The secondary pack came in 20 seconds later with Russia’s Kirill Belyayev out-touching France’s David Aubry for the bronze by 0.7 seconds.

“It was my plan to go ahead from the beginning and I’m really happy to take the gold medal,” Evsikov said. “It was a good race, the water was a bit cool, but I managed to get use to it and could concentrate on my swimming.”

Vera won his second silver medal at this level after his performance in the 5 km race at the inaugural 2012 FINA World Junior Open Water Swimming Championships in Canada. “Though we train in the Caribbean back home and the colder conditions were a bit unusual, it wasn’t a problem after all. I fought with the Russian all the way, tried to beat him in the finish but he was too strong. I’m really happy to repeat my silver medal from 2012 over a distance 2.5 km longer.”

“It was great to stand together with Anton on the podium,” said Russian teammate Belyayev of his bronze. “I’m really happy with this medal, I didn’t expect it actually.”