The Legacy Of Florrie Berndt 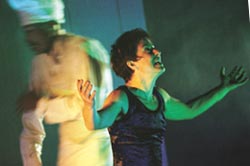 Jennie Reznek [shown above] and Mark Fleishman extensively studied the early history of life on Robben Island and the first organized race when 14 swimmers attempted a swim from Robben Island to Cape Town in South Africa.

While 15-year-old Peggy Duncan was the only woman who completed that race in 1926 in 53ºF water, Florrie Berndt kept swimming for over 13 hours.

Berndt never finished the inaugural race due to exhaustion. She later returned to Robben Island where she was the daughter of the island’s baker and nurse, and raised children of her own while nursing lepers. But her legacy lives on due to the efforts of Reznek and Fleishman.

The husband-and-wife duo created 53 Degrees, an acclaimed play based on Berndt’s Robben Island attempt and life on Robben Island.

The play addressed the broader liberation struggle in South Africa within the context of Berndt being swished around in cold ocean currents.

53 Degrees, sponsored by the National Arts Council and Pro Helvetia (the Arts Council of Switzerland) and supported by the University of Cape Town, was directed by Fleishman while Reznek played Berndt.