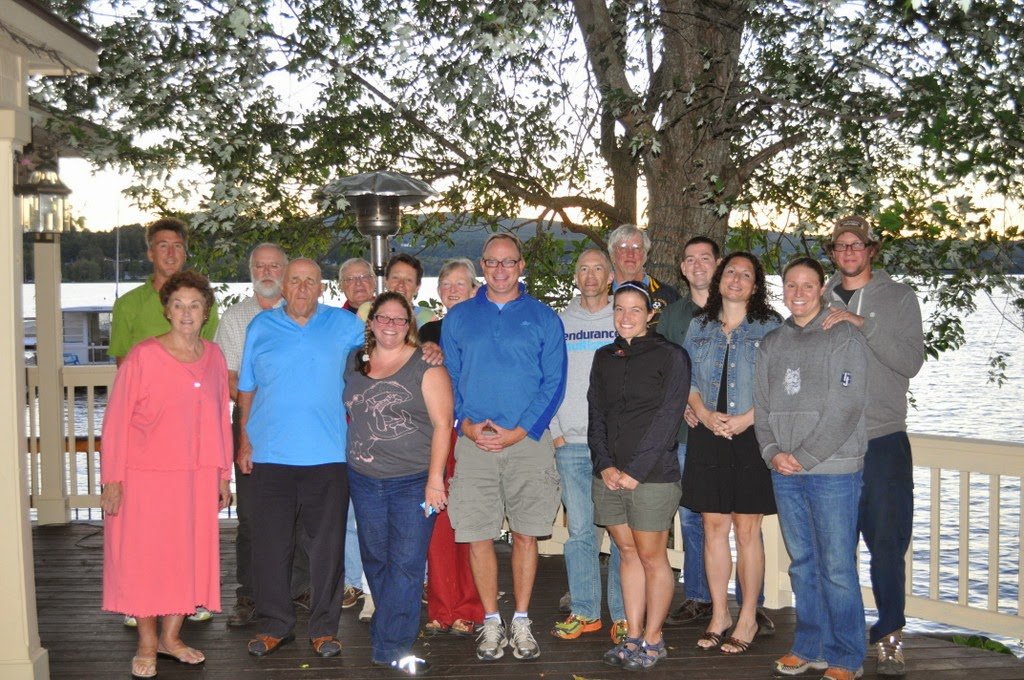 The legend of Memphre© is here presented by the Kingdom Swim in the Northeast Kingdom of Vermont.

Billy Connor, the first person to swim across Lake Memphremagog between the United States and Canada in 1955 in 18 hours 55 minutes, was one of the first swimmers to meet Memphre©.

He talked about the old times and old swims when he recently met contemporary marathon swimming superstar Sarah Thomas, the first person to complete a double crossing of Lake Memphremagog in 30 hours 1 minute (15 hours 9 minutes on the first leg and 14 hours 46 minutes on the second leg) in 2013.

The historic meeting of pioneers was held in conjunction with the Northeast Kingdom Open Water Swimming Association pizza party. For more information about Connor’s encounter with the mythical Memphre©, visit here.

It may be that the famed Loch Ness Monster of Scotland and Memphre© of Lake Memphremagog might be holders of common DNA. If further investigation proves to be true, then the open water world will have formally share its findings with the International Society of Cryptozoological Researchers and The Science of Cryptids.

A recent hint of the possible relationship between the Loch Ness Monster and Memphre was when Ted Denny completed a late fall workout on the Canadian side of Lake Memphremagog. “I was coming back in from a comfortable 5 km workout as the sun was about to set. I was swimming along the shore along the border when the shade of the hills created a grayness in the water. So I moved on the sunny side of the line and the rays of the sun streaked down from the surface to the depths below. Then I saw it (Memphre). It was big and moved slowly with the grace of a large whale shark. That was my first impression, but I knew that was only a fleeting thought. I had just finished doing the Maui Channel so I had sharks on my mind. But I knew that a shark couldn’t be true in a lake in the Northeast Kingdom in Vermont. So I deleted that thought from my mind, but the large silhouette moved with me. Gracefully moving along but down pretty deep. Then I thought why didn’t I bring my camera! But just as soon as it appeared, Memphre disappeared.

I went back to the lake every day that week until I had to travel home. Always at the same time, but I never saw Memphre again. Over the years, this imagery receded to the back of my mind. But then I had the opportunity to do a few swims in Ireland. I figured that I had come this far, so I might as well as visit Loch Ness. Same time, same situation, same animal. I was swimming along the shore in that part of the lake where the shadows created a border with the sunnier side of the lake. Similar sighting, similar size, similar movement. Here I was in Loch Ness and I was seeing Memphre all over again. But it couldn’t be Memphre, it could only be the Loch Ness Monster. But I tell you; these two creatures are the same size, they move the same way underwater, and they are as close as a porpoise is to a dolphin from what I saw
.”

The second hint of the possible commonality in the DNA of the Loch Ness Monster and Memphre was when Lizzie Samuels was training for a channel crossing. She did some training in Lake Memphremagog and then headed to Scotland to train in Loch Ness. “I have swum all over the world and I always see wave sharks, even in lakes. And wave sharks always scare me. I have an active imagination, but I know it when I see a real animal.

I had heard about Memphre before, and then when I saw it underwater, I wasn’t really scared. I was prepared and it was impressive to see. I know Ted. Ted told me about his sightings of the Loch Ness Monster and Memphre, but I never followed his advice for taking a waterproof camera with me. I regretted that decision. Then just last year, just like Ted has experienced, I got to see the Loch Ness Monster in Loch Ness. About the same time, about the same coloration, about the same size, although it seemed like Nessie could swim faster than Memphre. I’d like to see them side-by-side, that’s for sure
.”

Billy Connor is shown in the photo above dressed in the blue shirt second from the left.