The Legend Of The River Mile, Mally Richards And Family 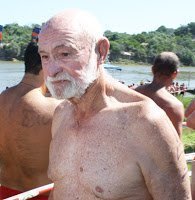 Since 1947 the then-15-year-old Mally Richards participated in his first 60th SPAR River Mile – and has been participating ever since in the oldest open water swim in Africa.

Over that period of time, he has some unique perspectives over the annual race.

His fastest times over the course were recorded in his early twenties during the 1950’s when he was most fit from water polo. But his most enjoyable River Mile was in 2006. “It was a real festive occasion with lots of friends doing the event,” he explains, “When I was standing on the start line, it was just felt like you knew everyone.”

While Richards stayed the same, he observed some changes over time. “The competitiveness of the event has changed the most. In the early years, the field was very limited. It is very competitive now. It’s a lot bigger and certainly more social.”

Mally will be swimming with his son Kevin, a former 6-time winner of the event, and his two grandchildren Sean (14) and Marc (10) who will be taking part in their first River Mile. Kevin will participate in his 26th swim having first swum when he was 8 years old, despite having missed the better part of the last decade whilst living in the UK.