The Legend Of Wilson In The Water 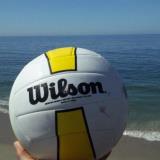 The fun-loving imagination of the Oak Streakers never ceases to bring joy and entertainment to their open water swimming lifestyle.

Wilson is a water-logged volleyball that is used as their mascot. A washed-up volleyball also has precedence in Hollywood. A similar volleyball was used in the movie Cast Away starring Tom Hanks with roots in the open water.

Wilson was probably cast adrift off the shores of Laguna Beach in February 2012.

Though Wilson’s origin is unknown, Lynn Kubasek postulates that Wilson was likely born at the sand volleyball courts on shore on Main Beach in Laguna Beach. While swimming around the Main Beach buoy, Kubasek accidentally swam into Wilson and decided to swim with it for a bit. Some stand-up paddlers saw her swimming with Wilson and told her to “take good care of Wilson” – and the legend of Wilson was born.

Kubasek decided to take Wilson all the way back to shore and introduced the legend of Wilson to her fellow Oak Streakers.

Since then, Wilson, with its own Facebook page, has been an unofficial mascot of Oak Streakers swims, joining the pod on more than a few adventures, occasionally dressing up in costume when the pod does one of its themed swims on St. Patrick’s Day or for a birthday swim. And Wilson is no stranger to channel swimming as it has also been an unofficial observer on a few Catalina Channel and Anacapa Channel crossing.