The Life And Times Of Doug Woodring 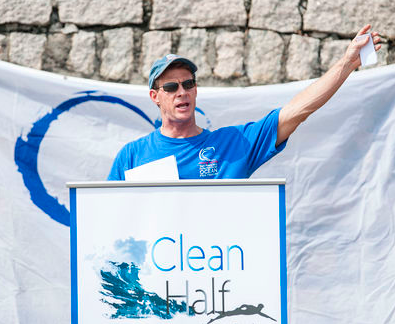 In addition to organizing and promoting events such as the Hong Kong / San Francisco Ocean Film Festival, The Ocean Walk, the Clean Half Extreme Marathon Swim, the Cold Half marathon swim, Sheko Challenge, The Five, Kids Ocean Day, and the Grate Art, the relentlessly passionate Doug Woodring gives speeches and also organizes the Plastic Disclosure Project, the Plasticity Forum, the Global Alert Platform, and a variety of other events managed and promoted by the Ocean Recovery Alliance.

From Asia to Europe and many places in between, Woodring seamlessly merges the worlds of marine environmentalism, education and open water swimming.

Later this month in California, the Olympic Club member continues his speaking engagements at the Environmental Defense Fund on plastic issues and is assisting the recycling team in Japan who are making all of the 2020 Tokyo Olympic Games gold, silver and bronze medals from recycled mobile phones e-waste.

He also created the two-day Water Falling Festival in Cambodia where over 1,500 people gathered on the Ton Le Sap Lake. “Our goal is to expand this event to many of the villages surrounding the lake from year to year,” explains the University of California Berkeley graduate.”

Bangkok Ocean In Motion Summary Video of Chang Chui. “We did five events and one for the Bangkok School for the Blind,” said Woodring.

Plasticity Malaysia. “Our next event will be Plasticity Pacific in Fiji on March 13th for the island nations and solutions for smaller communities,” said Woodring.