The Life, Leadership, Legacy Of A Great Swimming Coach 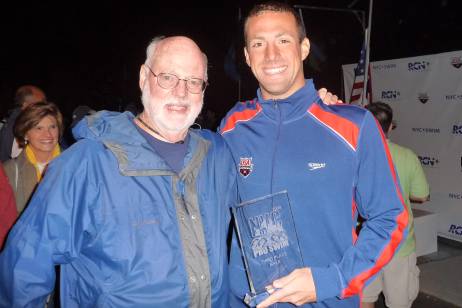 “I love coming to work every day, but I wouldn’t call is work. My life has been enriched from being here, I am blessed,” says coach Richard Shoulberg of the Germantown Academy.

Alicia Aemsigger of Princeton University warmly describes Coach Shoulberg, “He cares about us as swimmers, but he cares more about us as people.”

Now that is a coach whose has raised the bar of the profession.

Besides giving some of the most notoriously difficult workouts this side of Vladimir Salnikov’s regular 30,000m training sessions and coaching a number of accomplished open water swimmers including Fran Crippen and Arthur Frayler, Coach Shoulberg has coached at the 1992 and 2000 Olympic Games placing 12 different swimmers on the USA Olympic Swim Team. Over the course of 60 years, he has also led American swim teams at a number of international competitions from the 1986 World championships to the 1983, 1991, 2003, and 2007 Pan American Games, and coached 2 world record holders while teaching swimming at the grass-roots level from pre-school through 12th grade stressing learn-to-swim, lifeguard certification and fitness training in five to six classes a day. The results have not gone unnoticed as Coach Schoulberg has been named American Swimming Coaches Association Coach of the Year twice (in 1982 and 1989).

His success and intensity as a coach is matched by the warmth of his smile and the genuine wish for the right thing to be done at all times by his swimmers.

Nothing more can be expected of a great coach and leader of young people.