The Long And Short Of Training For Lake Pontchartrain

Gotta like Matthew Moseley‘s training approach to his upcoming 25-mile crossing attempt of Lake Pontchartrain from the North Shore in New Orleans to the New Canal Lighthouse in Louisiana.

“My coach Randy Soler from Puerto Rico has me doing Ultra Fast Race Pace Training, which has been helping my times and overall endurance. Plus a lot of dry land training,” explains Moseley.

“To prepare I have done a 25 km open water swim in Puerto Rico in early March, many 10-12 km training swims between, and a 15 km pool swim last weekend. 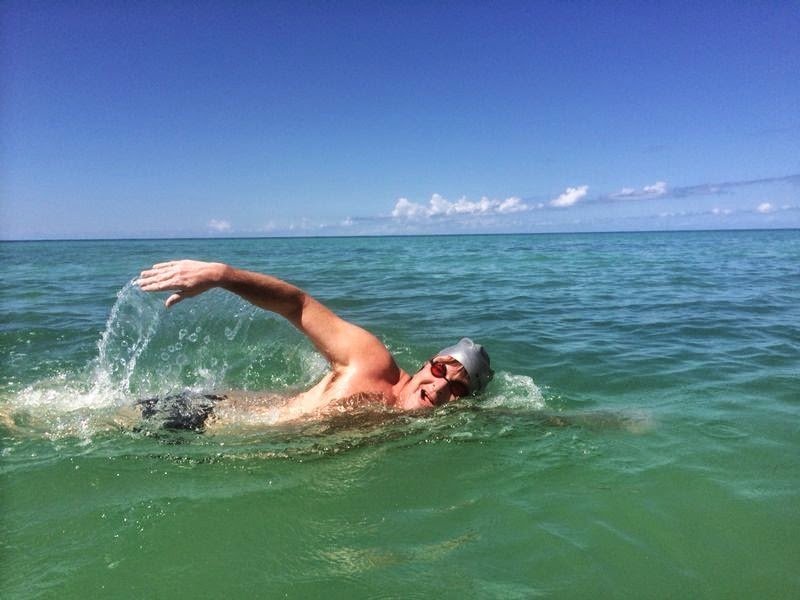 I also started the training last year doing the Swim Around Key West in 5 hours 1 minutes, having just come off a shattered tib/fib and ankle in August 2012. I’m just happy to be swimming and grateful for the journey

Moseley’s swim will benefit the Lake Pontchartrain Basin Foundation and will be the subject of a documentary film to bring awareness to coastal wetlands issues and recovery of the lake.

“I want to acknowledge their success in cleaning up Lake Pontchartrain by actually being a part of the lake’s ecology and taking a nice long swim,” said Moseley, a communications strategist, author, and native to the area.

Moseley was born locally, grew up in Lafayette, and he loves everything New Orleans. He has done 2 previous Lake Pontchartrain swims in support, but never solo and never from shore to shore. “The public can pledge support for the swim at saveourlake.org with all donations going to Foundation’s continuing work on behalf of the lake and the coast. I want to raise awareness of the need for continued vigilance and the money to help make it happen.”

“We are really excited to celebrate the hard work that our volunteers, supporters and employees have done to clean up Lake Pontchartrain and protect one of the most valuable resources we have in this region,” says Executive Director John Lopez. “Having Matt here doing this swim is a perfect way to do that, and the timing couldn’t be better. Matt and so many locals who support LPBF are an inspiration to LPBF staff who work every day for our mission, against the enormous challenges of our coast, and toward protecting our environment. So it’s great for all of us to look forward to Matt’s return and his plan to stage another great adventure. We are all getting very excited, and we hope the public will, too.”

Moseley’s crossing will be a highlight of the documentary [see trailer below] that award-winning filmmaker Wayne Ewing is making on the lake’s hard-fought recovery. The Foundation will provide a boat at the Lighthouse to ferry media and other visitors into the lake to observe the progress of Moseley’s swim. Musicians, including composer David Amram and bluesman Papa Mali, will be aboard a support boat to make music during the swim. Secret Moonbase Productions and Royal Artists will provide nautical themed art to commemorate the crossing.

“I equate open water swimming with getting off the track and on the trails for running or hiking,” explains Moseley. “In open water, we leave the pool and the lane lines and the clock behind. We are all descendants of the water, and after swimming for long periods, one begins to feel that connection. After several hours of swimming, all thoughts wash away and the adventure becomes simply you and the water … In some small way, I would like for the swim(s) to make the connections between humans and our waters (for) somewhere along the way, we have lost what water means.”

For more information on his swim, visit here.

Additional articles about Moseley’s crossing include: