The Maelstrom Seven, A New Challenge 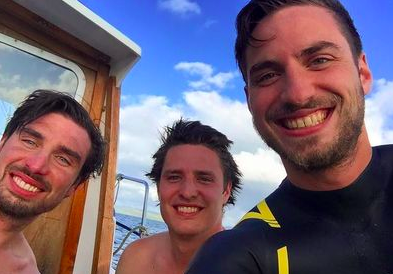 The Oceans Seven was first proposed in 2008 and first accomplished by Stephen Redmond four years later in 2012.

The Ice Sevens was first proposed in 2016 and was accomplished for the first time by Jaimie Monahan a year later in 2017.

Now, Calum Hudson and the Wild Swimming Brothers has proposed the Maelstrom Seven, a series of 7 solo open water swims through, around or near famous whirlpools around the world.

How long will it take someone – quite possibly Calum, Robbie and Jack Hudson – to accomplished the Maelstrom Seven?

The whirlpools include the following:

1. Moskstraumen: the strongest and biggest whirlpool in the world whose central whirlpool has a diameter of 40–50 meters (130–160 feet) and tides combined with the northerly Norwegian Sea currents and storm-induced flow result in currents up to 10.7 knots (20 km/h; 12 mph).

2. Saltstraumen: a 0.25 km tidal split with the world’s fastest whirlpool, up to 400,000,000 cubic metres of seawater forces its way through a 3 km long and 250-meter wide strait every six hours, with water speeds reaching 22 knots (41 km/h; 25 mph). The whirlpool swirls violently off the Norwegian coast, above the Arctic Circle and on the edge of the Lofoten Islands.

4. Naruto whirlpools: tidal whirlpools in the Naruto Strait, a channel between Naruto in Tokushima and Awaji Island in Hyōgo, Japan, about 1.3 km (0.81 miles) across with tidal difference of up to 1.5m between the Inland Sea and the Pacific Ocean that causes the speed of the water to reach 20 km/h (12 mph), creating vortices up to 20m (66 feet) in diameter.

5. Te Aumiti: a narrow and treacherous stretch of water that separates D’Urville Island at the north end of the South Island of New Zealand from the mainland coast with tidal flows reaching 8 knots (4 m/s).

6. Old Sow: largest tidal whirlpool in the Western Hemisphere that form an area with a diameter of 76 meters that are located off the southwestern shore of Deer Island, New Brunswick, Canada, and off the northeast shore of Moose Island, the principal island of Eastport, Maine.

7. Skookumchuck: the powerful tidal rapids at the mouths of the Kootenay River in Skookumchuck, British Columbia, Canada.