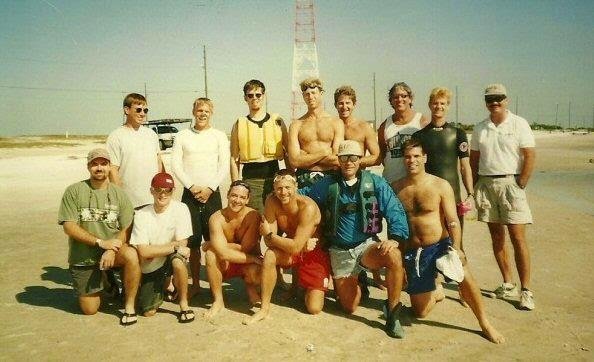 The Majesty Of The Tampa Bay Frogman Swim

The start of one of the most fun and solemn open water swims in the Americas is at Earnheart Beach off the west coast of Florida. Driving along the highway from Tampa, one suddenly comes across the huge mass of cars parked off the road on grass and the dirt.

In the midst of dirt and grass, a huge high-resolution television screen rises majestically in the midst of hundreds of swimmers, kayakers and spectators. The screen shows the names and photos of fallen military warriors. Flags fly and the intense solemnity in the air are palpable. People are here to raise awareness and funds for the Navy Seal Foundation as well as to participate in a challenging mid-winter swim.

Terry Tomalin, together with Dan O’Shea and Ron Collins, gave insight into the history of how the Tampa Bay Frogman Swim came about in 1996.

“On November 27th, we swam across the bay on Terry’s birthday,” recalls Collins who swam with his Clearwater Beach Safety lifeguard friends. “The water was rough and the conditions were sketchy. It was not supposed to be a race and we were supposed to stick together, but instead we all got separated early. We just tested the course, but we didn’t have any lifeguards. In fact, the swimmers were lifeguards [see photo above].”

Then the group started the swim that day, they later labeled their effort, the Tampa Bay Open Water Challenge. “We had some good swimmers. Robert Margolis won one year. But it was not a sanctioned event for 3 years. Then the Tampa Bay Bay Watch organization got involved and it was defined as a charity swim. But after a few years of not raising too much money, the Bay Watch people started to lose interest.”

Tomalin also remembers the early days. “It started out as a swim across the Bay with a bunch of our lifeguard buddies. It was fun and just a challenge. We left a case of beer on the beach at Picnic Island and then drew a line across a map. These were the days before GPS. It turned out to be 3.1 miles (5 km).”

Tomalin also recalls the same conditions as his colleague Collins. “The current was strong that first year. But we did it. One guy got swept past the bridge and we all ended up a long way from the [intended] finish, so we climbed up onshore, got all cut up, and then had to run to the finish.”

After the event was held in 1997, 1998 and 1999, the Tampa Bay Watch organization turned its focus on other events as the Tampa Bay Open Water Challenge became a page in the open water history books.

The decade-long lull in operations actually turned out to be a precursor to its current revival as one of the world’s most successful charity swims.

“After more than 10 years, a few things happened,” described Tomalin who had heard about Sam Farnan, a teenager who wanted to become a Navy SEAL. Tomalin suggested that 17-year-old Farnan join him for a swim across the Bay.

“Dan [O’Shea], a former Navy SEAL, and I heard about a fellow SEAL Lt. Dan Cnossen who had lost his legs after being wounded in Afghanistan. We put a few things together in a few weeks, called Ron who called a lot of his friends, and we had over 30 people make it across the [old Tampa Bay Open Water Challenge] course.”

O’Shea and Tomalin worked with Lt. Mark Lampman to made the inaugural revival swim a grand success as a charity swim. The concept, called the Tampa Bay Frogman Swim, resounded among the local swimming and military communities.

With only 160 swimmers at its 2015 event, the Tampa Bay Frogman Swim has emerged as one of the world’s most supportive charity open water swims. “We raise a lot of money for the Navy SEAL Foundation and the community keeps responding.”

It responds because of the mission to help others and because there is so much passion and support for the swimmers.

From the names of fallen men that are solemnly announced before the swim to giant screens that showcase the swimmers, the event is a local birthday swim that has gone major attracting Olympic gold medalists and accomplished swimmers in the middle of January.

National champion and USA Swimming national team member Becca Mann says, “It was lots of fun. There was a big current, pushing right on the long stretch so I ended up going perpendicular around the buoys. It was really cool and is one of my favorite races.”

Serbo Simeoni, who was one of the few who completed the swim without a wetsuit, was shivering unmercifully but smiling widely nevertheless. “It is a great event. The current was strong and we had to swim at an angle to compensate. It was a good test.”

The test was taken – and passed – by many. The Naked Spirit Award was given to 12-year-old Sean Doolittle, a local age-group swimmer who was the youngest person in the event. “He swam well today,” said his father who was pushed by his young son. “With a kilometer to go, his kick came up and it look everything that I had to keep up with him.”