The Man In The Pool Is A Great In The Water 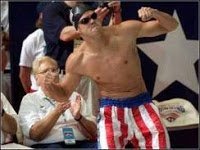 Gary Hall, Jr. had some mighty big moccasins to fill. His father Gary Hall, Sr. was one of the all-time great American swimmers.

But Junior did it his own way and did it extraordinarily well and colorfully.

Following the footsteps of his father who was inducted in 1981, Gary Hall, Jr. joins the International Swimming Hall of Fame Class of 2013.

Gary Jr. is a multi-faceted sprint freestyler with 10 Olympic medals for this efforts, 5 of them gold won at the 1996, 2000 and 2004 Olympic Games. he also participated in and stood on top of the podium at numerous world championships and Pan American Games. He won back-to-back gold medals in the 50m Olympics in 2000 and 2004 and was only 1 tenth of a second out of the gold at the 1996 Olympics.

What is interesting about Gary Jr. is how he incorporated open water swimming in his Olympic sprint swimming training. He did a lot of ocean swimming mixed in with his pool sessions and readily acknowledges that swimming in both the pool and open water helped him in both. And besides his speed and prowess in the pool, he was also courageous in the open water. He won the 2007 Adolf Keifer Safety Commendation Award given by USA Swimming for his heroism in the Atlantic Ocean when he saved his sister from a shark attack.

He also continues to be involved in promoting a number of open water events throughout the United States on behalf of the Edith Sanford Breast Cancer Foundation and remains a huge proponent of the discipline.