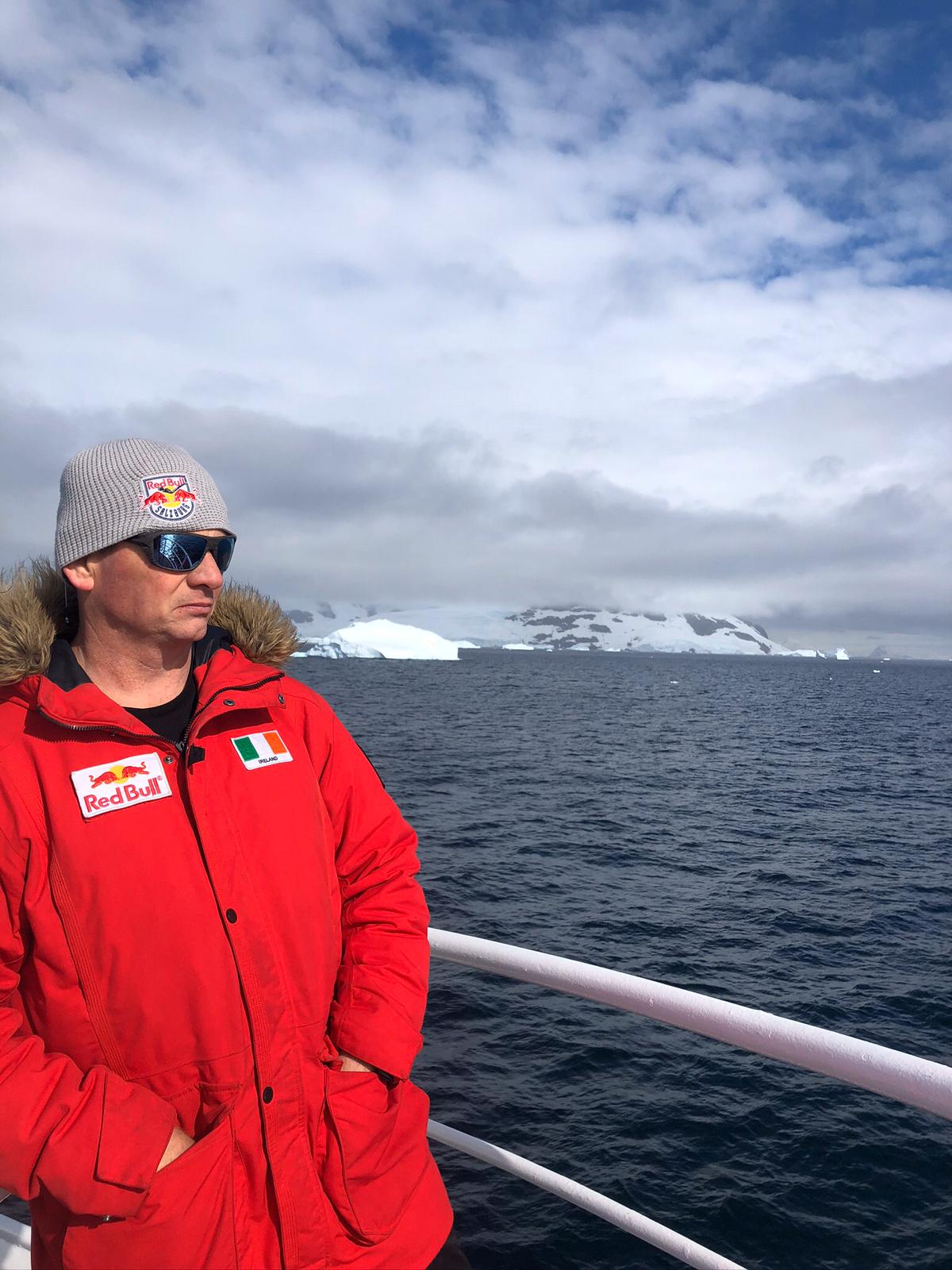 Ger Kennedy came up with the concept for the Antarctica 2020 swimming expedition in November 2016. He launched the expedition in the public domain in March 2017.

Kennedy explains, “My idea from the beginning was to bring a bunch of ordinary open water swimmers on a swimming trip like no other. I launched this project early mainly due the costs involved allowing people time to save or saving schemes.

Been Irish led, I ask skilled friends and my wife Alice to form a organizing committee.

After discussing with 3 expeditions companies, I soon realized the enormity of the task and permissions required. So after we were refused twice, I pooled my resources in Antrapply Expeditions. Ute Hohn-Bowen MD with 30 years experience in Antarctica Travel took interest in our possible expedition. After several phone and mail conversations plus some letters of support from Irish Antarctica Explorer Groups and a detailed risk assessment, Ute gave me the go-ahead with some restrictions on how many swimmers doing 1 km or over.

The MV Ushuaia was a perfect expedition vessel of 88 passengers. The small vessel has advantages to get to remote location that large ships cannot go. Plus with IATTO (International Association of Antarctica Tour Operators) rules only 100 passengers can only land at one time. So based on this, we had more time on land for everyone.

I decided from the beginning to try and get to swim in the Antarctica Circle so our journey was labeled as Polar Swimming Quest. This longer journey of 12 days on ship added an additional cost of US$1000 to each member compared to a classic Antarctica cruise.

Abbey Travel in Dublin, Ireland handled all our finances and payments to Antrappy so the organizing committee did not handle any money.

A team of 18 athletes assembled from Ireland, Wales, England, Romania and Argentina. The group included 3 Ice Mile hopefuls, 4 Ice Kilometer hopefuls, 7 happy to swim any distance, and 4 companions including a BBC cameraman.

After landing in Buenos Aires on February 13th, we had arranged a casual meeting with Ute Hohn-Bowen over lunch hosted by my friend Matías Ola based in Buenos Aires. I found this a great, relaxed meeting in order to get to know each other in person. Matías was a huge contributor to this.

We landed Ushuaia on February 1th and had pre-arranged 2 days of test swims in the Beagle Channel located in Puerto Almanza and Los Cauquenes Resort with a water temperature of 9°C and air temperature of 10°C. Our swimming distance was 1 km on the first day and 2.6 km on the second day (over two locations). It was similar distances for a group of seven.

We had another pre-arranged meeting with Ute Hohn-Bowen and her designated expedition leader, Monika Schillat. This was an extremely important meeting to showcase my skills as expedition leader. All our medicals and insurances where checked, details on the swimmers were checked; the agreed upon distances were checked etc. Plus we had discussions of IATTO rules and Argentinean Navy Permit requirements. So with two German ladies collectively with 57 years of Antarctica experience sitting in front of me, there was no room bullshit.

After this meeting, we had a general meeting with all 18 of us and we shared the information just received from Antrappy. The one thing I explained to all was that we are going into the unknown, sharing our journey with 70 other tourists and passengers so nothing is 100% guaranteed. Amongst other things, we discussed our own code of conduct, the social media blackout or the damming videos that would affect the future of swimming in Antarctica, and how privileged we are to be part of this once-in-a-lifetime adventure.

For me, setting some ground rules on land before setting sail is a golden rule instilled by my father with 50 years of sailing experience. He said people change when the get on a boat with confined space and no privacy, no WiFi or phone signal. Group dynamics can change quickly.

Thankfully, I have been reading up for the previous 3 years on Antarctica explorers and attending many lectures on Irish-born Shackleton Autumn school and Irish-born Edward Bransfeild 200-year Anniversary Committee, Irish-born Tom Crean appreciation society plus many conversations with historian Eugene Furlong 1820 first to sight mainland Antarctica. Book of note: When Your Life Depends on It: Extreme Decision Making Lessons from the Antarctic by author David Hirzel who I met.”

Kennedy continued with his report, “All 14 swimmers achieved their goals as follows:”

Kennedy’s total costs to achieve an Ice Mile at Paradise Bay in Antarctica were as follows:

The costs are now 5% more for the 2021 season. Note: triple sharing and a standard twin with bunk beds are cheaper.

This was my final leg to swim an Ice Mile on seven continents and become the first man to swim an Ice Mile in both Arctic and Antarctic. It was with great pleasure to see people achieve their Antarctica swimming goals. For me as expedition leader, I had huge responsibly on my shoulder: What if? What could go wrong? It could have destroyed swimming in Antarctica for the future. That wasn’t going to happen on my watch so the future is bright.

I want to extend a huge thanks to my wife Alice Kennedy, Assistant Expedition Leader Tiffiny Quinn, and Medical Officer Martina Ring.