The Most Interesting Man In The Open Water World 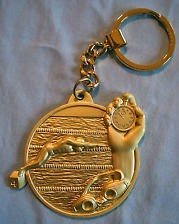 For his 70th birthday, he had a wonderful keychain made.

He has traveled the world for decades overseeing and acquiring numerous memorabilia, antiques, and collectibles. He has worked with the Beatles. He has done countless swims including the Bermuda Round the Sound Open Water Swim.

He has studied law and business administration at Yale University. He volunteered for military service with the famous 82nd Airborne Division, specializing in parachute assault operations.

He has raced stock cars for many years and competed in LeMans in 1958. He won the Rickenbacker Trophy in sport fishing.

He loves table tennis, drove a Land Rover from London to Khatmandu, was a photo journalist and war correspondent, and served as the vice chairman of the swimming program at the New York Athletic Club.

A renowned American and world masters swimming champion, Richard Ellis is an 81-year-old member of the Asphalt Green Masters of New York City who has been successful all his life, “I am very competitive by nature. I wake up an older person, but after swimming, I feel young again. Everyone should keep active, mentally and physically, as much as they can.”

Few have been so active for so long in so many fields as Richard Ellis, possibly the most interesting man in the open water world.