When Swims Go South – Or North 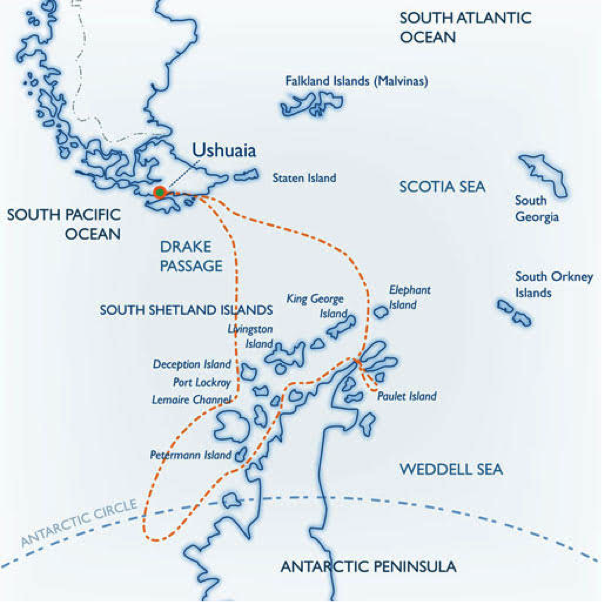 An increasing number of ice swimmers are scheduling journeys to the bottom of the planet. In planned tandem swims, they are finding their way to Ushuaia in Argentina as the send-off point to swims in Antarctica. Next year, the 13-day Antarctica Off The Beaten Track Expedition in 2018 will include an Ice Kilometer Swim, an ice swim organized by the International Ice Swimming Association in Antarctica. The IISA ICE KM Swim will have 3-4 heats of 4 swimmers each with a cut-off time of 25 minutes.

Additionally, Ger Kennedy is organizing a series of swims up to 1 km at the Antarctica 2020 event held in the Bellingshausen Sea and the Weddell Sea [see map above].

Meanwhile, only Pugh has completed an open water swim at the Geographic North Pole [see video below].

This focus on the south may change over time and more extreme swimmers may join Pugh as members of the Arctic Swim Club.

Eric Holthaus is a meteorologist and contributing writer for Grist who covers climate science, policy, and solutions for the Wall Street Journal, Slate, Grist, and other publications. He recently wrote an article called Let it go: The Arctic will never be frozen again.

He writes, “The Arctic as we once knew it is no more…the region is now definitively trending toward an ice-free state.”

The National Oceanic and Atmospheric Administration described the area as the New Arctic in a recent report that included the following statement, “Arctic shows no sign of returning to reliably frozen region of recent past decades.”

As the Arctic changes from its most recent state that has existed over millennia, the implications for the rest of the planet are understood by many – and more extreme swimmers may follow the wake of Pugh in swimming up north while calling for changes in how mankind deals with these unfolding changes.