The Night Before And The Wind Is Howling 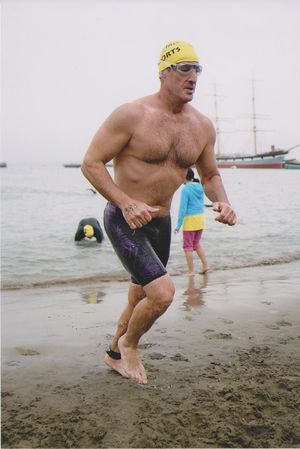 Julian Rusinek will be departing the California mainland on the Blue Fin late tonight from Ventura for his unprecedented one-way and two-way attempt between the islands of San Miguel and Santa Rosa in the California Channel Islands.

While the one-way distance is only 3.6 miles, it is potentially an extraordinarily wild and totally gnarly swim in a part of the world when marine life (read Great White Sharks) can be numerous, curious, unavoidable, and aggressive due to the plethora of sea lions and seals on both islands.

“Right now it is 25 knot winds with 5 foot waves. Not fun! The forecast for my Saturday jump time at 5 am looks like 15 knot winds and only 3 foot waves…the best it will be all month with chilly seas,” says Rusinek as he eyes his early morning swim tomorrow

The focus of open water swimmers on their goal the night before when the winds are howling and the waves are swirling is always admirable.

The latest update: Weather remains unpredictable and the Captain called off the attempt due to 10-12 foot seas and 30 knot winds on the way over. “Es no bueno,” said Rusinek. “We rescheduled my swim for more favorable conditions on Monday, leaving Santa Barbara at midnight Sunday .” Copyright © 2013 by Open Water Swimming