The Ocean Provides An Endless Abyss Of Opportunities 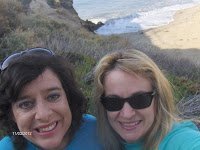 Laura Lee has been trying to recruit swimmers all the time, but she always runs into excuses masquerading as questions. I always heard things like, “You mean to say you swim IN the ocean?” and “Isn’t the water freezing?” and “Aren’t you afraid of sharks?” But one of her friends, Jeannine Chomyn at the age of 50, agreed to take her up on her invitation.

“Jeannine may have had a panic attack her first time, but she did it again the next week and continues to swim faithfully,” said her swim buddy.

“I was on a swim team as a child, but I hated it. I preferred my dance classes,” said the 51-year-old. “In my early 20’s, I would go to Santa Monica and splash in the white wash waves, but that was my only ocean experience. For the next 30 years, I would not go into the ocean. I would take my children to the beach and I would sit on the shore.”

But Lee somehow got her up from the shore and into the water. “Laura did a lot of coaxing and calming before and during our first swim. I was so scared. My very first ocean swim was in March 2012. If anyone told me that at age 50 that I would be swimming in the ocean, I would have told them they were insane.” Insanity and nervousness are no longer issues with their regular ocean swims. “I don’t get nervous anymore. During my first two swims, I was nervous about sharks, but that has faded. We swim at Little Corona (beach) under great conditions.” But the inseparable ocean-swimming pair have a system. “During our first 3 or 4 swims, Jeannine insisted that we swim side-by-side. She was on the shore/sand side and I on the deeper ocean side. That way, I’d get bit first by any unwelcome sea creatures approaching from the deeper waters. I was her human shield. She has since gotten over that, commented Lee.

In fact, after the Lompoc Great White Shark fatality, followed by 2 Great White Sharks caught in Manhattan Beach last week, I figured Jeannine would cancel our swims or that I would have to dole out another anti-shark pep talk. She never canceled our swim, and I never brought it up, hoping she hadn’t heard about it. Last week, as we drove to the ocean and were putting on our caps, Jeannine asked casually, “Did you hear about the Lompoc Shark attack?’ Jeannine seems to have no fear now days. Once you start ocean swimming and have that personal, spiritual ocean experience, it’s hard to stop.”

The pair research the water conditions with Lee taking the lead. Chomyn follows her out past the surf and they begin their regular 1.2-mile swim adjacent to the shore line, occasionally encountering sting rays and Garabaldi fish.

With any specific open water swim goals, the pair swim for the physical and emotional benefits the exercise provides, enabling a new lease on life. “I still can’t believe that I am now 51 years old, and I swim in the ocean on a weekly basis,” recalls Chomyn. “It is so crazy. With my current work schedule, I am only able to swim Saturday mornings, but if time permitted, I would be in the ocean every single day.

And I never plan to stop. I look forward to our weekly swims with such enthusiasm. The thought of stopping would be incomprehensible to me. With enough training and practice, I could possibly even work up to competing. Who knows? The ocean is an endless abyss of opportunities.”