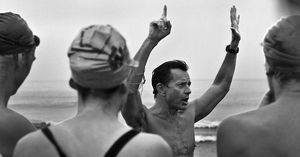 American coach Gerry Rodrigues of Tower 26 in Santa Monica, California penned a strong opinion piece that is gaining much traction in the triathlon community (see here).

He made recommendations to the triathlon governing body, coaches and athletes about participating in triathlons and establishing temperature collars (minimum and maximum water temperatures that triathlon can be held).

…Unfortunately, a participant passed away [at the Alcatraz Triathlon]; yet another triathlon related swim death. The water temp was 51-52ºF (10.5-11.1ºC) according to race officials, however, it is purported at actually being 49ºF (9.4ºF) according to various other sources. It’s finally time for me as coach, former open water athlete, and a recognized leader in open water to take a position. In my 31 years of coaching triathletes and 41 years of open water experience, this is my first stand, and it’s an important one. I have authored the following piece on our blog, titled The Open Water Grave.

What we find refreshing is that this opinion and the collective voices of the triathlon community are being heard and considered by its national governing body.