The Pleasure And Payne Of Coaching 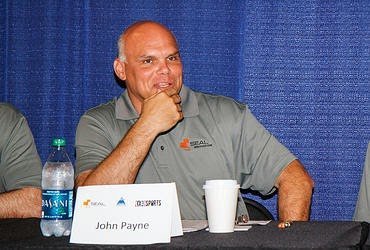 An experienced triathlete who has coached since 1988, Payne has first-hand with the starts, turns, pacing, positioning and finishing with open water swims. “I raced on the Bud Light US Triathlon Series circuit in the late 1980s and did some racing in Canada and Bermuda while competing at every triathlon distance from sprint to Ironman length.”

His competitive spirit and tactical mind as a multi-sport athlete carries well over to the sport of open water swimming. “Open water has a different tactical dynamic than pool swimming which for me makes it extremely interesting to both coach and watch. Each race is a story that unfolds.

Open water racing has a similar feel to bike racing. The thought-processes regarding drafting, maintaining proper position in a pack, making moves and covering moves are very much the same. The team dynamic is different than cycling, for the most part, but the individual tactical elements are present. Also, seeing the athletes grow in their decision-making abilities race-in, race-out is fun to see
.”

The long-time swim coach in the Raleigh-Durham area is also a licensed coach for soccer and track and field. His cross-over experience has enabled him to conduct athletic development programs for athletes in a number of sports. But his current focus are the athletes at SEAL Innovation Team. “I have five swimmers that I’m currently coaching through SEAL Innovation – two open water and three pool swimmers. I also work with the age group team that trains at the Triangle Aquatic Center.”

Payne has a demeanor about him that speaks of professionalism, focus and seriousness with an obvious sense of compassion and enjoyment. “The biggest thing [to my advantage] is probably understanding the life of a professional endurance athlete. I know the training demands, the travel demands, and the hustle for support. The second thing is I see myself as being in a position of building a relationship with each athlete which is focused on placing them in the best possible position to achieve their goals. Training for me is an ongoing conversation with each athlete.”