The Prequel To An Unprecedented Swim 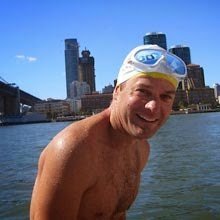 Before Sueño 88 becomes the first humans to swim 88 nautical miles (101 miles or 163 km) across the Sea of Cortez from the Baja California peninsula to the mainland of Mexico, many things must first occur.

It is not merely a matter of training hours upon hours, miles after miles. It is not simply funding the charity swim to raise money for Worldreader. It is not merely trying to plot the best navigational course. It is not getting ready to encounter carnivorous and potentially deadly Humboldt squid, debilitating jellyfish, and migrating Great White Sharks.

It is also about the mundane, the bureaucratic and the government.

Bialla had to prove the seaworthiness of MARIANA, Sueño 88‘s 52’ twin diesel escort cruiser, to the authorities of the state of Baja California, of the Mexican marina and of the Port Authority.

“The Ministry of Tourism of the state of Sinaloa (where Sueño 88 intends to land) is aware that our landing point is uncertain,” explains Prieto. “But they want to organize a welcome committee in Topolobampo where they can invite the media. We will keep them posted via the link to our Spot tracker on the most likely landing points and timing as we make progress through the Sea of Cortez.”

The Baja California Department of Protección Civil will give each member of the team a standard medical check at 8 am in Tecolote Beach the day of their swim. “Given that the authorities will provide support, we must sign a document that liberates them from any liability. The document simply states that we are in good physical condition, that we assume any inherent risks with this activity, and that we liberate the authorities of any liability with our name, date, signature, person to contact in case of emergency.”

Their effort is being applauded in many places. “We have the Mexican government as well as both governors on each side of the Sea of Cortez excited and supportive. Helicopters and press will cover our event.”