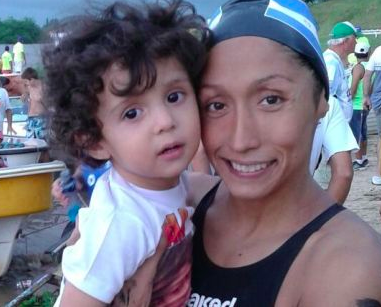 She will participate in the 44th edition on February 4th. The four-time Olympian remembers won the 2011 race where she swam stroke-for-stroke against the top men – and will use that experience this year.

“We started the preseason in October after two weeks of vacation.

They were very good weeks of training with good feelings. We are well prepared to face another Maratón Acuática Río Coronda after a 7-year absence from the race
,” said Biagioli although she also planned to race in the 2015 edition that was cancelled due to bad weather.

“We had almost 14 weeks to think about how I will swim this race again. At the beginning of 2017, I had an injury, but I completed my recovery. I am very well prepared, if God wants and there is no extreme pain, I will enjoy this race.”

She trains with a strong group of swimmers. “Having a good working group is important, increasingly so for this swim. I have already gone from training in large groups doing interval training. I think it’s a great motivation to swim fast several kilometers a day every day. Although sometimes we do different workouts, the mere fact that several more are in the group makes [heavy training] more bearable. And the support of Claudio (her brother and coach) is fundamental for me, he knows me well after working together for almost ten years. He is passionate about what he does. And our desire to continue dreaming of important achievements is what leads me to continue training today.”

The brother-and-sister team is focused on two events in 2018: the ODESUR in June and the South American Games in October. Personally, I would like to be able to do the FINA UltraMarathon Swim Series, but it is not yet known if there are other dates in the calendar.

She talked about her role as a mother. “Today, my son Joaquin is close to 5 years old; caring for him is now a bit easier. The great part of the day is that he joins me at my workouts and at my physio and dryland sessions. It is great that he understands and likes it. But it is sometimes difficult to sleep on some nights due to some unforeseen events. Travel of many days is also something that we have to deal with.

But in spite of everything, Joaquin understands this. It is very gratifying to know that he is growing up in this environment and that you see me doing what I love so much. It fills me with tenderness and pride to hear that he is my fan and that he encourages me to continue. That is priceless
.”