The Protective Cocoon Of An Escort Crew 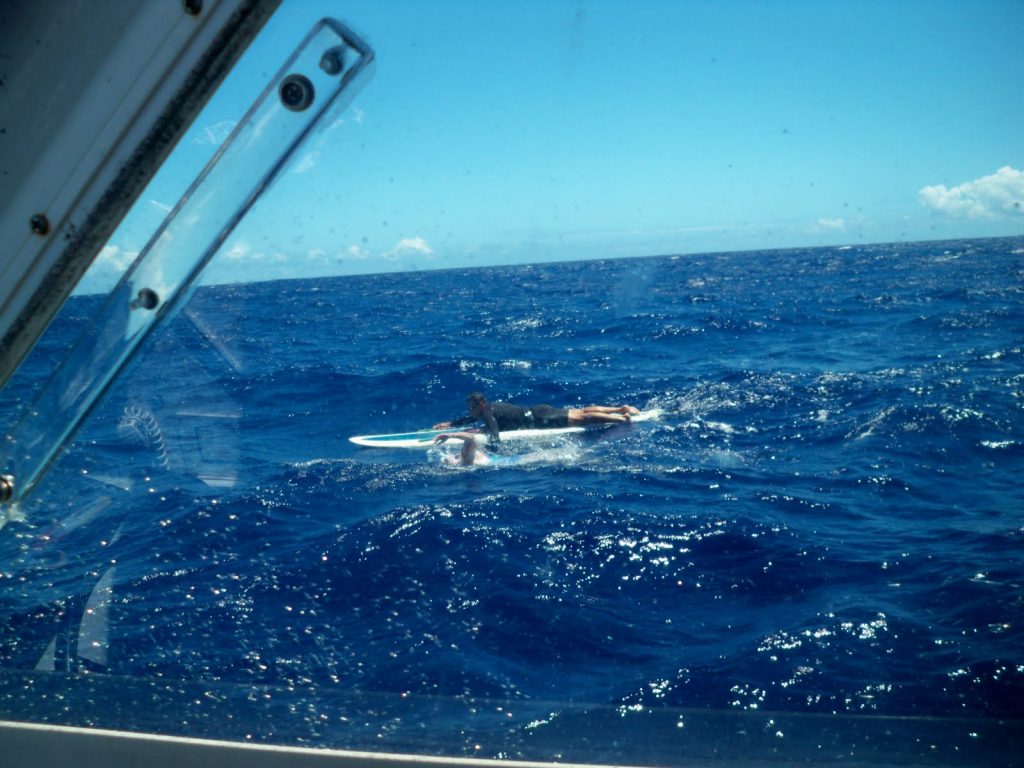 Sitting in an escort boat observing Penny Palfrey attempt to swim 72 miles between the islands of Oahu and Kauai, we knew the distance was outlandishly far. If successful, Palfrey would rewrite all possibilities of channel swimming in Hawaii.

But for gigantic blooms of box jellyfish that arose to the surface at sunset and twice dashed her dreams, Palfrey was on pace to make the unprecedented 115 km crossing. Psychologically, Palfrey had to deal with not only marine life but also the enormity of the Pacific.

As we marveled at her audacity and abilities, we also experienced two different emotions out in the 10,890-foot deep (3,319 m) Kaieiewaho Channel. The first emotion was how insignificant and infinitesimal we felt between two relatively tiny dots of terra firma in the middle of the largest body of water on Earth. The Pacific seemed to swallow us up. The ocean below was miles deep; the closest islands were hours away; the sky above presented an infinity that was impossible for us to intellectually grasp.

We felt smaller than microscopically tiny. It was not even fair to make comparisons on the same scale as Mother Nature about our presence on the Kaieiewaho Channel.

Conversely, we felt safe at home on the 34-foot June Louise. We felt as one with the team that Palfrey put together: Jeff Kozlovich, Bill Goding, Chris Palfrey, and Captain Don Jones.

The June Louise rocked endlessly amid the enormous seas, but the decks on the boat were our oasis. While four men watched over an intrepid woman attempting to swim 72 miles battling against gigantic swells and wind-whipped turbulence, the boat and teamwork created a sanctuary, a protective cocoon. Looking out across the horizon from the confines of the boat, there were reasons to be nervous and worried. But looking in the eyes of our team focused on the relentlessly powerful strokes of Palfrey, there were ample reasons to feel safe and confident.

It was a remarkable paradox. On the surface, nerves were on edge. But deep within our hearts, we were enjoying the adventure even knowing that the unexpected could strike at any time. And immediately after sunset, the terrifying screams of Palfrey pierced the blackness like a celestial alarm. The venom of the box jellyfish, injected inhumanely via barbs into her waterlogged skin, was the instantaneous catalyst for action.

Hawaiian lifeguard Kozlovich who was paddling at her side when she was hit by the box jellyfish immediately stopped and got her over to the side of the boat within a minute EMT Goding assisted her onboard together with her husband Palfrey as Captain Jones stopped the engine and instigated emergency procedures.

In a blackness of night without any hint of light but the illumination on the boat, it was obvious that Palfrey had swum into a bloom of jellyfish as tentacles drenched every limb like icicles off a rooftop. Normally a stoic women with a tremendously high pain tolerance, the massive doses of venom were simply too much. “Get them off me!” she begged. “My skin is burning!” The full attention of the crew was to relieve her of this living hell.

Once her body was rid of the tentacles under the expert handling of Kozlovich and Goding, she was injected with an EpiPen and bundled up warmly as Captain Jones floored the engines for the long bumpy ride to Kauai. While the June Louise kept bouncing hard off each and every ocean swell as Captain Jones sped towards the closest harbor.

Ultimately, that protective cocoon we initially felt on deck was precisely the instrument that helped bring Palfrey safely to harbor. It was an illustrative example of how valuable an experienced crew can be out in the high seas.