The Remarkable Life And Career Of Otto Kemmerich By Erik Eggers

The Remarkable Life And Career Of Otto Kemmerich By Erik Eggers

Otto Kemmerich, born in 1886, was a visionary and adventurous open water swimmer from Husum/Nordfriesland, Germany who swam many of his marathon swims unescorted. He was inducted in the International Marathon Swimming Hall of Fame in 1968 as an Honor Swimmer.

Kemmerich (1886-1952) retired as a health insurance employee and turned his passion to swimming at the age of 34 years old. He lived adventurously – and died – plying through the waters of Europe.

His career was extensive:

In 1922, Kemmerich swam 6 km from the island of Nordstrand to Husum.

In 1924, he swam from Husum to Westerland in several stages. He failed on the way from Amrum to Sylt due to strong currents.

In 1925, he swam 50 km from Fehmarn Island in Germany to Warnemünde in Denmark in approximately 22 hours.

In 1925, he attempted an island-to-island swim from Husum to Sylt, but he abandoned the swim during the last stage from Amrum to Sylt due to strong currents.

In 1925, he swam from Norddeich to Norderney in Germany.

In 1925, he swam 50 km from Fehmarn to Warnemünde across the Bay of Danzig in East Prussia in the Baltic Sea without a boat through a thunderstorm in a about 22 hours 56 minutes. After that he called himself the World Champion.

In 1926, Kemmerich did not succeed in the English Channel. At midnight, after approximately four hours in his swim. Later, the press criticized him heavily for swimming with webbed gloves.

In 1926, he was the first person to swim through the Fehmarnbelt from Puttgarden to Rødby. He received an award from the newspaper Politiken with the amount of 1,000 Danish krones.

In 1926, he tried to swim the English Channel again, but aborted due to an injury.

In 1927, he swam 32 hours straight in a small swimming pool in Hamburg-Wandsbek and celebrated it as a world record in continuous swimming.

In 1928, Kemmerich exceeded his world record in endurance swimming to 46 hours in a 44-foot basin in Hamburg. He swam in a small basin of the Circus Busch with a sea lion.

In 1928, he swam 80 km in the Baltic Sea for 43 hours 15 minutes from Fehmarn Island to Warnemünde, Germany. During his nearly two-day adventure, he was feared dead because he was unescorted and truly swimming solo.

In 1929, he swam more than 100 km from Pillau to Zoppot (at that time both were located in Germany) along the coast unescorted without any assistance in 23 hours 15 minutes.

In 1929, he swam from Rottum to Borkum in a storm. On the next day, he tried to swim further from Borkum to Memmert also in a storm. Due to the storm, he drifted to Norddeich where he landed after 12 hours.

In 1929, he swam 62 km from the Lighthouse Staberhuk on Fehmarn Island to Warnemünde, Germany in 20 hours.

In 1930, he swam from Juist to Norderney in Germany.

In 1938 he planned a stage swim through the North Sea and the Elbe from Borkum to Hamburg, but he failed on his first stage to Juist and was washed up in Norddeich.

Between July and August 1952 at the age of 66, he planned a 200 km stage swim from Esbjerg, Denmark to Husum, Germany. He wanted to swim the distance of 200 km from island to island without a boat, but he died during the last stage from Hörnum (Sylt) to Amrum on August 11th. His body was later found by a fisherman near Föhr on August 17th 1952. 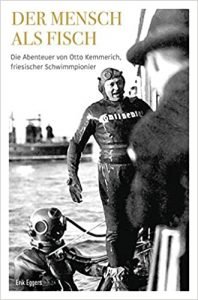