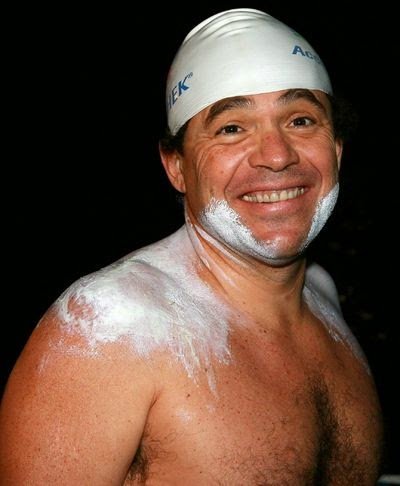 “We all have one ‘channel’ to cross: be it the English Channel, thirty minutes of daily exercise, or just not quitting school.”

So said Antonio Argüelles Díaz-González, the epitome of a Renaissance Man in the open water swimming world.

Argüelles was born in Mexico City in 1959 and is a 1982 graduate from Stanford University.

His passion for swimming was born in Cuernavaca, Morelos where his grandfather had a cold water pool. He started off swimming fast and has never slowed down.

Inspired by the 1968 México City Olympic Games, he eventually earned a place in Mexico’s national swim team in the 400m and 1500m freestyles. Later, he took up running and triathlons, and completed several marathons and Ironman triathlons while establishing a reputation as a business leader, educator, and author in his native Mexico.

He became the first two-time member of the Triple Crown of Open Water Swimming and founded the Mexican Triathlon Federation in 1989 where he served as its honorary president since 1995.

He also established de ‘Day of going to work without car’ (Día de trabajo sin coche’). Because of this, he was awarded the Golden Shoe Award by Runners World Magazine in 1993.

But he always found time to train and complete all kinds of endurance events including the Manhattan Island Marathon Swim, Catalina Channel crossing, Swim Around Key West, and English Channel.

He also co-wrote with Nora Toledano the book, “A cada brazada: el azul interminable” (“At Each Stroke: The Endless Blue“) in which he retells his experiences of crossing channels. The Spanish-language book colorfully describes Toledano and Argüelles’ numerous open water swimming challenges around the world and what they experienced. In their colorful prose, they equate their channel swimming experiences to a survival in the sea of life.

Argüelles is done much more than just survived; he has absolutely thrived.