Road Between Golds Goes Through Fiji For Dana Vollmer 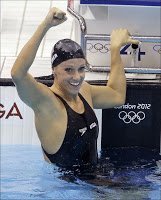 It might be a stretch, but 100m butterfly champion Dana Vollmer at the London Olympics may kick-started her Olympic victory and world record in Fiji.

After a gold medal in the 4x200m freestyle relay at the 2004 Athens Olympics, Vollmer missed out at the 2008 Beijing Olympics. As can be expected, the disappointment was crushing.

But she accepted an all-expense trip to compete in the 2008 Fiji Swims and participated in the 18km relay. She cruised, she smiled, she enjoyed the beautiful tropical waters and got her batteries re-juiced in Fiji.

She experienced, as Dr. Wallace J. Nichols describes, the BLUEMiND.

Her connection with the ocean was immediate and profound: she loved the smell of the tropical air, the sound of the sea breeze and the feel of the sand between her toes; she returned home refreshed.

“We just felt like we needed to get her out of the United States and, for lack of a better way of putting it, her own pity party,” recalled coach Teri McKeever of Vollmer’s trip to Fiji.

“When she got to Fiji, she seemed a bit distant, but she came out of her first leg on our relay with the biggest smile in the world,” said teammate Steven Munatones. “Then every subsequent leg, she became more and more radiant. By the time we landed on Beachcomber Island, she seemed to put her disappointments in a distant past.”

“It was such an honor to swim with her and [Olympic silver medalist] Alison Wagner,” said Bill Ireland, another teammate on the 18km relay. “When you are on a boat in a tropical paradise, you can’t help but have a great time. She was so relaxed and just so magnificent to watch in that marine paradise.”

“I got to do an open water race for the first time, and it just really made me realize that I loved being in the water, and I loved swimming, and I had a blast doing that open-water swim,” Vollmer told the media. “It made me realize that [the biggest issues were] the injuries and the training and the pressure that I was putting on myself mentally. I look back to 2008 and I wasn’t excited to race and compete. I was more worried about what happened if I failed, and who did I let down, and how that would look for Teri and my hometown. I crumbled under that. I couldn’t take that all on.”

But those pressures and disappointments were put behind her when she returned home. The result?

Vollmer had a breakout year in 2009. She soon set her first American record and won 2 medals at the world championships. She continued her streak in 2011 at the World Swimming Championships when she won 2 gold medals and a silver.

But it was today’s Olympic victory and world record in the 100m butterfly that completed her comeback. Her smile was golden.

Congratulations to the young lady who never lost sight of her vision or her goals…and that generous invitation to relax and get recharged in Fiji.

Photo by the Associated Press.