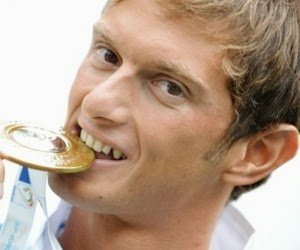 Led by Simone Ercoli who won yesterday’s 15 km, there are 29 swimmers who will compete this weekend at the 41st Maratón Acuática Internacional Santa Fe – Coronda in Argentina, representing 13 countries.

The Quini 6 is supported by the Lottery Santa Fe. Director Álvaro Gaviola explained, “For us it is a pleasure to be again present with Lottery supporting this sport, as well as its cultural and social manifestation because they have great social impact in our region.”

Carlos Iparraguirre said, “I want to emphasize the importance of these races which are so rooted in history with the ties to the community and its natural environment. The events highlight what the Government of the Province of Santa Fe does through the Lottery, uniting the three races that allows the athletes to sustain part of the international professional marathon swimming calendar. It is a wonderful start of the annual sports calendar where the Provincial Government offered its first Olimpiadas Santafesinas to show its support in the province.”

Marcelo Micocci of the Maratón Acuática Internacional Santa Fe – Coronda explained the relationship with his fellow race committees, “This is the third time we have organized this Quini 6 together with Cristián Fredes, Andrés Solioz and Alberto Sampayo and with more Lottery support. This allows us to showcase Rosario, Santa Fe and Paraná as the most important center of international open water swimming. No place in the world has this level of swimmers and social impact.”

Fredes of Rosario added, “We thank the Government of the Province of Santa Fe and the organizers of the other two marathons whose support we have received.”

Andrew Solioz of Hernandárias – Paraná expressed his similar gratitude, “The lottery provides support for the marathon city of Parana. Together with Marcelo Micocci and Cristián Fredes, we worked for several months trying to get our marathons ready for the FINA Open Water Swimming Grand Prix professional circuit.”

20 men and 9 women representing 13 countries will take part in the second leg this weekend: