The Molokai Channel, also called the Kaiwi Channel (“the Channel of Bones”), separates the islands of Molokai and Oahu, is about 27 miles (43 kilometers) wide (long), even though a swimmer travels a longer distance due to currents and strong wind which characterize the Kaiwi Channel and reaches a depth of 2,300 feet (701 meters). In my case, my Garmin watch marked an exact distance of  46,486 meters from the starting point at Kaluakoi (Molokai) to Sandy Beach (Honolulu/Oahu) 70%, possibly more, of swimmers fail on their first attempt.

The Molokai Kaiwi Channel is one of the most treacherous bodies of water in the world.

As my window approached, (June 19 – 25) I spent a fair amount of time analyzing the weather forecasts all from Windy app, Wind Guru and Wind Finder sources. They all showed similar conditions forecasting strong +20 kn winds and 1.7-2 m swells all on a North – East direction. However, on the 18th going into the 19th of June a small window with better conditions was forecasted.

We met with Captain Mike Twigg-Smith on Thursday 16th of June  at the Waikiki Yacht Club and we all agreed that we should take that opportunity to go out on the 18th starting at 5 pm from Molokai.

On the next day, I couldn´t avoid having a sneak peek at the forecast and that window of wind drop was not there anymore, it was all green +16 kn of steady wind. However, we kept going forward and booked the flight to Molokai on the 18th.

Over the flight we were all staring at the channel with our eyes wide open! There were white caps all over the ocean and you could perfectly see big waves formed on that magnificent sea space. I won’t deny it, I felt very intimidated by that scenery and by what I was just about to experience.

I just closed my eyes and repeated constantly “you got this, this is what you are here for, take it as it is and live every second of it”

We took a taxi at Molokai´s airport, and the taxi driver was very curious about the swim, he told us that he was very excited because he drove another American swimmer a few weeks ago and he found out later that she had made it across the channel as he checked the success swim list. This gave me a motivation booster as I really wanted him to be proud to see my name on that list as well.

As we approached Karuakoi, we found a mystical place that used to be a hotel and now is inhabited by several international investors, we started prepping for the swim. We could see the boat anchored at the beach waiting for us.

On my team I was accompanied by the following state of the art crew:

My Wife Josune as general support

Kainoa Lopes (as a Paddler)

Emma MacDonald (as a Paddler)

All very excited to start the adventure.

I jumped in the water at 5:30 pm. Followed the marathon swimming rules governed by WOWSA and waited at the beach for Nora who started as the first shift kayaker to give me the start sign to synchronize our start watches to have feeds every 30 minutes.

Just as I entered the water, I was welcomed by a turtle who got so close to me I could touch it. This was so overwhelming that I stayed for a couple of minutes just floating over it, so amazing!

For the first two hours I was just trying to get into flow and tuning with the big waves and wind, the swell was over 2 meters tall, and it was pushing hard sideways, Nora was also trying hard not to run over me on the kayak. We were all getting ready for the dark night to come.

As soon as it got dark and night fell, I started spotting an unparalleled ceiling of stars which lasted for around an hour until the moon came out. At this point, I felt like I was just dancing with the huge waves!

The next 3 hours were great! I felt ok and was trying to stay in “the zone”. At this point I was only concentrated in focusing and to be calm, I was constantly thinking about how I was “only around 10-11 hours away from the finish, not 17-19 anymore. At he the same time, in some odd way this gave me comfort, but I started to feel vulnerable, lonely, tired and my stomach was starting to struggle with my feeds.

As the 7th hour arrived, I stopped for my 13th feed and as soon as my mouth felt that sour taste of a specific kind of gel, I couldn’t hold in anymore and started to barf. The only two times that this has ever happened to me, I was training for my English Channel swim, and I was set to complete “hours for training” not distance, so I completed them and could cope with the sea sickness but most of the time I was floating not being able to swim at a decent pace.

At this point I realized that at my very best scenario I was probably halfway, negative thoughts started to take over my mind and I became aware that if I couldn’t control this, I was not going to be able to get to Oahu. The swell was so big that kayakers were being rolled out loosing feeds, they needed to go back to the boat to resupply and so I had to stop frequently drifting, this didn´t help with my motion sickness but at the same time I was aware that they were also performing a HUGE effort, firstly to keep me safe but also to keep going. To have the feeds from the escort boat was just out of the question, every time I had to stop for a feed, I was losing the kayak for over 10 meters, I had to kick my way to hand the trash and empty bottles, we were always spinning trying to keep together as I was also very aware that I couldn´t touch the kayak.

Afterwards I was told that as Nora was monitoring and preparing feeds on the escort boat, she was thrown overboard by a big wave! All the team luckily reacted quick enough, and my wife Josune gave the alert stop to Mike. The boat was stopped immediately and fortunately it was Nora who went overboard who swam as quick as an Olympian to get back on the boat.

IT WAS THIS ROUGH OUT THERE!

My 7 – 10th hours were all about crisis management, I was feeling tired, dizzy, mentally drained and at the same time VERY SLEEPY, it was that kind of sleepiness that comes out of fatigue. I was worried this could turn out into a DNF.

My feed on the 10th hour was again a disaster, I burped once again, but this time by brain got upset about it and gave an instant signal of OK, THIS IS IT! this was the last one! In some way I managed to tighten my throat, I tightly closed my eyes and started sprinting like desperate!

This helped me so much that I was once again feeling good as new! I picked up my pace to 16 minutes per km which I had lost for 4 hours, I had slowed down at an average of 21 minutes per km. The sun started to rise! This was one of the best swimming feelings I have ever had! The night felt never-ending!

At this point, I could spot on a far end, the Oahu shore mountains, this was such a relief! Nevertheless, I realized we were pointing way east, I asked Kai who was paddling at that moment, and he told me that there was a strong current which was drifting us from the east, we needed to fight that current and power through to get to Sandy Beach which was on the west side.

I didn´t ask more and as my good friends Marcia Cleveland and Barbara Hernandez suggested, I just kept swimming!

It took 3 more hours to get close to Sandy Beach, they felt like the longest hours, I just could not see how we were getting closer, but at that point I knew that I was already a Kaiwi Channel swimmer, absolutely nothing could stop me from getting a taste of that white sand at the beach!

I just put my head in the water and continued stroke by stroke with all my heart. I could see Josune showing me huge prints of photos from my daughter Jacinta! This was so nice and comforting. Suddenly, I spotted Mike just in front of me with a trendy pink top, a mask and fins, he asked me to follow him.

I realized we must be meters away from the beach, but with the swell and my puffy eyes it was hard for me to realize how close we were. Soon I spotted the beach break and heard my sister Andrea shouting from the beach. I just flowed with the break and as soon as I touched the sand I ran out of the water. My Mother Margarita and my sister Andrea were waiting for me at the beach and not only that! They surprised me with my 2-year-old daughter Jacinta! It was such an emotional landing.

I successfully finished my Kaiwi Channel crossing in 14 hours 48 minutes.

I want to thank all the crew for their amazing efforts to bring me to shore! I could honestly have never made it with anyone else. Special thanks to Mike for his impeccable operation and guidance! Thanks to the Kaiwi channel to let me swim with and across it! Such a great feeling! You got this! Just keep swimming!

This is a guest post by Rene Martínez Saenz – a 36-year-old Mexican pool and open water swimmer from Mexico City who completed the Triple Crown of Open Water Swimming. 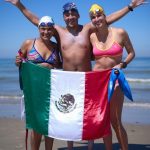 Rene Martinez Saenz
ED&F MAN currently employs René as General Manager for Ingenio Tamazula. Furthermore, René collaborates as an associate member for Pelagic Life, a Mexican NGO dedicated to marine biodiversity conservation which produced a documentary film called “México Pelagico” projected in Cinemas, The Discovery Channel and Netflix In 2014 and “México Pelagico” (the book) published in 2017. He is one of Pelagic Life´s photographers and raiseses funds throughought his open ocean swims to support and promote the organizations projects. In 2018 he became the 13th Mexican to complete the Triple Crown of Open Water Swimming