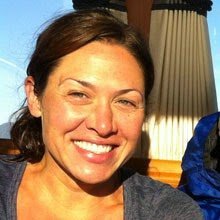 On June 3rd, six swimmers will depart the Sueño Bay near La Paz, Mexico in an attempt to swim across the Sea of Cortez.

The Sueño Six are trying to swim from the Baja California peninsula to the mainland of Mexico, a distance of 88 nautical miles (101 miles or 163 km).

The Night Train Swimmers have tried. Paul Lundgren has tried. Professional marathon swimmers have not even attempted to go beyond 25 miles in the Sea of Cortez. It is a massively formidable passage that has yet to be completed.

Severe jellyfish stings, threatening marine life, and dangerous weather conditions have called the end to every attempt and all dreams in these warm, turbulent waters of Mexico.

Sueño 88 is an initiative by Night Train Swimmers and Swim4Good, two organizations that use swimming as a vehicle to raise money for non-profit organizations. The goal of David Ogden, Mauricio Prieto, Luane Rowe, Richard Ernst, Shannon Navarro (shown above), Susan Moody Prieto, and Vito Bialla (captain).

Sueño 88’s goal is to raise US$100,000 to benefit Worldreader whose mission is to eradicate illiteracy by delivering the largest culturally relevant library to the world’s poorest people—digitally and inexpensively.